Automotive components firm Bosch has said it will deliver HGV lane-keeping technology to its first European customers before the end of next year.

The system, which uses a truck’s electronic power steering system (EPS) in conjunction with camera technology, prevents drivers from drifting out of their lanes, and will also be capable of giving a physical alert to the driver if he or she shows signs of fatigue at the wheel.

“I would say over the next two- or three-year time frame, you’ll see a lot of [manufacturers] announce what they’re going to do,” said Jason Roycht, a Bosch North America vice president who leads its commercial and off-road business. “Electric steering is not used very much in the freight industry. It’s all hydraulic. With some of these older systems, you have to have big forearms to operate the vehicle.” 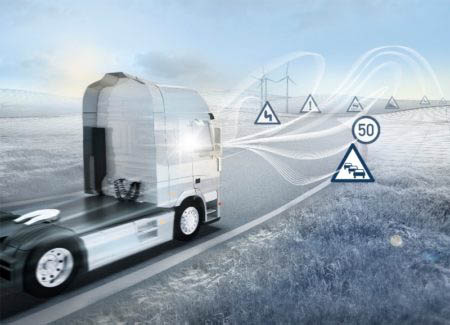 Bosch’s Servotwin, an electro-hydraulic steering system offers speed-dependent steering support with active response. It consumes less fuel than hydraulic steering and is capable of working in conjunction with other electronic safety alert systems. An electronic control unit receives what a high-mounted camera watching lane markings sees and nudges the cab back into its lane.

“I would say this is more important for a commercial vehicle than for light-duty vehicles,” said Sam Abuelsamid, an analyst with Navigant Research. “In a passenger car, it is generally easier to recover control. With a big truck, once things start to go wrong, it’s a lot harder to recover.”

Roycht said he thinks the Servotwin as an enabler to more automation could be a better solution for commercial vehicles than pure EPS, which would require much higher-torque motors.

“We’re going to approach a window in the next five years or so where there will be significant upgrades made to all the trucks,” he said. “That will be where [manufacturers], together with their fleet customers, will have to take a look at this.”