Toyota has announced it is to begin development of fuel cell powered delivery trucks in association with global convenience store operator Seven-Eleven.

The joint project will see the two companies develop new fuel cell trucks and fuel cell generators, with the first stage of the project going live next year.

The initiative aims to introduce technologies and systems developed by Toyota in the running of Seven-Eleven stores and the company’s distribution services. Stationary fuel cell generators and rechargeable batteries will also be introduced in the stores, managed centrally by building energy management systems. 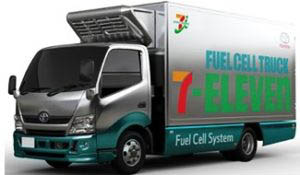 This will increase the proportion of renewable energy and hydrogen-sourced electricity that is used. A new small fuel cell truck will be introduced to the distribution process, with the aim of zero tailpipe emissions.

Initially, the project will be rolled out in Seven-Eleven convenience stores with fuel forecourts in outlying districts of Tokyo, Japan, with the ultimate aim being a global rollout to Seven-Elevens in the USA and in Asia-Pacific and Australasian markets.

Early next year, a pair of fuel cell trucks will go into service in the Tokyo Metropolitan Area, while fuel cell generators using the same Toyota technology will be used to power a number of Seven-Eleven’s convenience stores in what’s though to be the world’s biggest integrated trial of fuel cell technology.