It may sound like something out of a sci-fi movie, but major parcel companies are exploring the possibility of using autonomous flying containers to replace trucks for long-distance haulage.
Elroy Air, a San Francisco-based start-up company, is in discussion with UPS and FedEx to pioneer the technology, which would use shipping containers with helicopter-style blades that operate using the same technology as drones, but in a much heavier duty form.

The idea is that the drone containers would fly to central cargo hubs, where they would be ‘landed’ onto trucks to complete the regional delivery cycle, reducing the need for trucks to cover such long distances.

“Companies that can respond and be faster and more flexible will be the winners as the logistics landscape continues to change,” said David Merrill, Elroy Air’s co-founder. 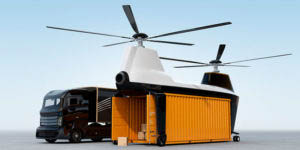 The Cargo drone companies will be among the first flying autonomous commercial aircraft, because they will initially fly in thinly populated areas where safety is less of a concern.

Elroy Air has already tested the flying containers in controlled airspace at Camp Roberts, a National Guard post in Central California. The prototype includes a detachable cargo pod that can be mounted onto a truck chassis.

“A lot of these companies like FedEx or UPS, with a fleet of aircraft to support their operations, are thinking very strategically about the long-term future of aerospace,” said Jesse Gipe, Senior Manager of Economic Development at the San Diego Regional Economic Development Corp. “The consensus is that a lot of manned operations eventually will move to unmanned at those companies.”