The 2018 Le Mans week has proved to be one of the most memorable for Gulf, on many different levels.
Gulf has marked the 50th Anniversary of its first victory at the world’s greatest race, the Le Mans 24 Hours, with various activities that illustrate the breadth of Gulf’s sporting and commercial partnerships, past present and future.

The weekend commenced at the Hotel de France in La Chartre sur-le-Loir, which 50 years ago was the team’s base for its attack on the Le Mans 24 Hours. Gulf recreated the Gulf-JW Automotive team actually driving its race cars to the Le Mans race track, with current Porsche race cars and Gulf’s Isle of Man TT Superbike being fired up and paraded along the traditional route that the victorious cars took through the streets of the town, and down the main road, in the direction of Le Mans.

Over the course of Friday, invited Media and more than 60 VIP guests, from every continent, enjoyed discovering more about Gulf’s motorsport partnerships, with appearances and Q & A sessions from Gulf’s Endurance teams: Gulf Racing and WIN Motorsports – who would be competing at Le Mans in the 24 Hours and Road to Le Mans race, respectively. Manchester United and England footballing legend, Andrew Cole talked about the 50th anniversary of Manchester United winning the European Cup, a 20-year career in the highest level of English Football and his thoughts on the 2018 World Cup. Andrew rode in the parade in a beautiful 1964 Chevrolet Corvette roadster.

Gulf’s TT Motorbike hero, Davo Johnson proved as entertaining as an interviewee as he is brave as a motorcycle racer and Gulf’s watch partners, TAG Heuer, used the opportunity to launch two new Gulf-edition watches – the ultra-exclusive 50thanniversary Monaco (fittingly, only 50 of which have been produced) and the beautiful Formula 1 – the watch designed to give a wide audience the opportunity of owning a Gulf-edition TAG Heuer watch.

he climax of the proceedings, for many, both during lunch and dinner, was the appearance of legendary Team Boss, John Horsman, who had flown over specially from America to be reunited with members of his Gulf-JW Automotive crew: Bill and Wendy Milligan and Maitland Cook. Seated alongside a 1968 Ford GT40 team car that is now part of the ROFGO Collection, the victorious 1968 crew members regaled guests with stories about racing for Gulf and, of course, about winning the Le Mans 24 Hours, receiving spontaneous standing ovations before they had even said a word, in recognition of their incredible achievements.

The climax of the proceedings, for many, both during lunch and dinner, was the appearance of legendary Team Boss, John Horsman, who had flown over specially from America to be reunited with members of his Gulf-JW Automotive crew: Bill and Wendy Milligan and Maitland Cook. Seated alongside a 1968 Ford GT40 team car that is now part of the ROFGO Collection, the victorious 1968 crew members regaled guests with stories about racing for Gulf and, of course, about winning the Le Mans 24 Hours, receiving spontaneous standing ovations before they had even said a word, in recognition of their incredible achievements.

On Saturday, Gulf officially celebrated at the circuit, with a huge anniversary cake, where guests were joined by Gulf racer and Le Mans winning driver, Derek Bell. 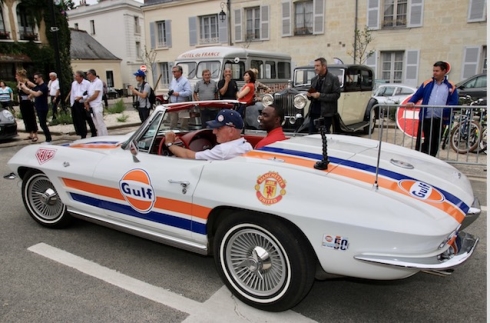 Le Mans itself, is paying homage to Gulf’s place in Le Mans history, with a superb exhibition – that will run all Summer – at the Le Mans Museum. Featuring Gulf cars that range from the car that first sported the famous Gulf light blue and orange racing colours, the Mirage M1, through the actual 1975 Le Mans winning Gulf GR8 through to the 2008 Aston Martin DBR9,sister car of the GT1 winner, the exhibit gives an exceptional insight into the cars and personalities who helped establish Gulf as such an important part of the Le Mans legend.

Sadly, although qualifying and the early part of the 2018 24 Hour race gave all the Gulf camp real hope of a Gulf crew once again mounting the top step of the podium at Le Mans, 50 years on from the initial win – with a front row GTE Am qualifying performance and the car running first in category – two high speed excursions off track, and the resultant contact with the barriers, put paid to a top three finish. But the valiant Gulf Racing crew showed immense perseverance and spirit, to twice repair the car and get it to the finish, eventually bringing the Porsche 911 RSR home to a top ten finish in the category.

It has been an absolutely amazing weekend for Gulf. Our participation at the Le Mans 24 hours has brought the brand global recognition over the past half century,” explained Gulf Oil International, Vice President International, Frank Rutten. ”For Gulf, however, it goes much further than this. When you are actually here, you see people sporting Gulf branded clothing everywhere you go. The impact the brand has at this event – and on motoring globally – is incredible and seeing the reaction that all of our various activities brought from guests, media and the general public, it is very evident how Gulf continues to feature prominently in the psyche of Le Mans.

“My commiserations, to Mike Wainwright and the Gulf Racing crew on not achieving the result we all hoped for. However, I must strongly commend them on the incredible efforts they went to in order to bring the car home to the finish. Truly they embody Gulf’s values of Quality, Endurance and Passion – and we will both be back again, fighting for honours here at Le Mans next year… which is, of course, the 50th anniversary of Gulf’s second victory in this incredible race!”
Updates about all of Gulf’s activities and products can be found on the Gulf Facebook page: www.facebook.com/gulfoilinternational as well as on the Gulf Oil International website: www.gulfoilltd.com