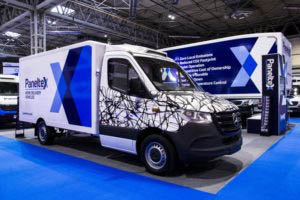 A surprise debutant at the show is the new Mercedes-Benz Sprinter, which is on display on the Paneltex stand. The Hull-based converter is using the all-new model to show off its first-ever refrigerated body, with the van wearing a camouflage wrap ahead of its official debut later this year.