An electric bus that can be fully recharged in less than 10 minutes could be set to revolutionise public transport infrastructure.

The AVM EV27 is a collaboration between US company Advanced Vehicle Manufacturing and Chinese technology company Yinglong.

Larry Brennan, AVM’s founder and CEO, said the bus could be recharged in a similar amount of time to that which it would take to refuel a conventional diesel vehicle.

The first batch of AVM shuttle buses will be made in Zhuhai, China, but both companies are looking for manufacturing partners to help them expand into new markets. 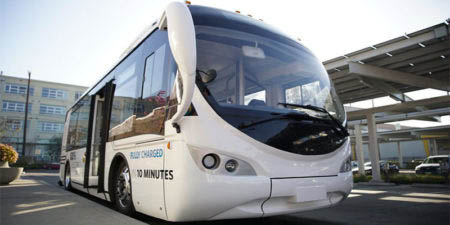 The EV27 is the result of a five-year joint venture between the two companies. AVM has worked as a consultant on various global EV projects, whilst Yinlong has developed and supplied batteries for a range of commercial vehicles in China, including buses, vans and refuse trucks. AVM is part of the Los Angeles Cleantech Incubator project, which supports companies in California to develop clean air plans.

According to Brennan, there are already 250 customers who have placed an intention to order one of the 27-foot long single deckers.

Over the next year, Brennan says AVM will move into two further businesses — building the 350-kilowatt charging infrastructure to support its EVs, and energy storage.

After 10,000 charge cycles, the bus batteries retain 95 percent of their efficiency, Brennan said.

“Even after the vehicle service life is done, the battery has a second life in energy storage,” said Brennan. “That’s going to be a growing market now that we’re moving more and more to renewable energy.”