One of the UK’s largest police forces has ordered its first fleet of fully electric vans.

South Yorkshire Police will add 12 Nissan e-NV200s to its ranks later this year following a successful trial led by Highways England, which is leading a campaign to reduce emissions in areas close to the M1 motorway.

Sarah Gilding, Head of Vehicle Fleet Management for the force, said, “The Energy Saving Trust delivered five vehicles to us on behalf of Highways England, which has been trialling them as part of a project to reduce emissions. After taking delivery of the vehicles last September, it quickly became apparent that the electric fleet was going to bring considerable benefits to the force. 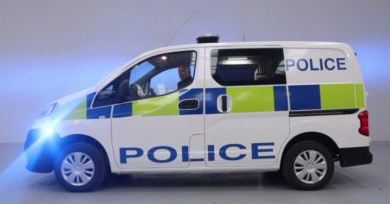 “These e-NV200s are quiet and efficient with no tailpipe emissions, my colleagues have enjoyed using them, and just as importantly the vans have delivered considerable fuel savings.”

In order to improve accessibility and flexibility, the force has added another three electric charging points to its police station sites in recent months, bringing the total to 16.

Christopher Plumb, Air Quality Programme Manager at Highways England, added, “It’s great that South Yorkshire Police is making the switch and pleasing to see this trial has helped it build the evidence to do so. This is just one element of our Air Quality Strategy activity to improve air quality on the Strategic Road Network.

“The project is helping us to understand the barriers to using electric vans on our network, and to see if there are ways of helping others like South Yorkshire Police to switch across to electric vans.”