Sealey is celebrating its 40th year in business and thought it would be the perfect opportunity to create a special promotion, which runs until the end of April.

There’s some exclusive pricing on a selection of over 200 of its most popular products and discounts up to 55 per cent inside the 40th anniversary catalogue.

The LED3605RA inspection lamp is supplied in a limited edition 40th anniversary box and has an exclusive patented design which is owned by and registered to Sealey. 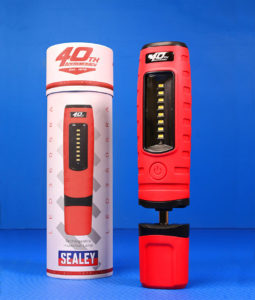 It’s unique and innovative 360° swivel and tilt function enables the light source to be positioned in any direction. Each lamp houses eight super bright SMD LEDs which provide up to 300 lumens output with 120° spread of light.

It includes an additional high power 1W LED directional torch and features a 360° swivel hook on the back of the light and a super strong rubber covered magnet on the base which allow for hands-free operation.

Powering the unit is a high quality 2.2Ah Lithium-ion battery for longer life, no memory effect and a much slower discharge than traditional Ni-MH batteries and is supplied with a micro USB charging port.

For more information on Sealey’s 40th anniversary promotion contact HBA Distribution on 048 3753 1155 or log on to www.hba.ie.