Renault Trucks has announced it will begin sales of electric vehicles from 2019, following an extended trial period of testing.

The trucks were designed primarily for use in urban areas and inner cities to reduce emissions and cut down on congestion by allowing out-of-hours deliveries to take place. 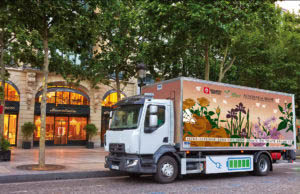 Research and development of Renault Trucks’ electric vehicles began in 2009, with a significant programme of real-world testing of 12 to 16 tonne trucks. The trial involved existing customers such as Guerlain, Carrefour, Nestle and the Delanchy Group, with vital feedback given on factors such as battery behavior, recharging facilities and maintenance requirements.

Renault Trucks has also been able to benefit from research and development resources provided by the Volvo Group, as well as tried and tested technology from electric bus development, allowing the manufacturer to bring its electrified vehicles to market by 2019. A dedicated assembly line for the vehicles is being built at Renault Trucks’ Blainville-sur-Orne plant in Normandy.

A Renault Trucks spokesman said: “As we transition to a lower carbon economy, electric trucks are driving the future for urban operations – we excitedly await production availability for our customers.”