As part of its rich racing heritage, FAI has sponsored numerous talented motorsport contenders over the years, including FAI 2017 Brand Ambassador, Chaz Davies. The Ducati rider treated fans to a spectacular season of extreme highs and lows (including injuries) in the previous WorldSBK series. Riding for Aruba.it on the iconic Panigale R, Chaz rocketed to 2nd position overall in last year’s championship, proving that he was the perfect representative of the FAI brand. 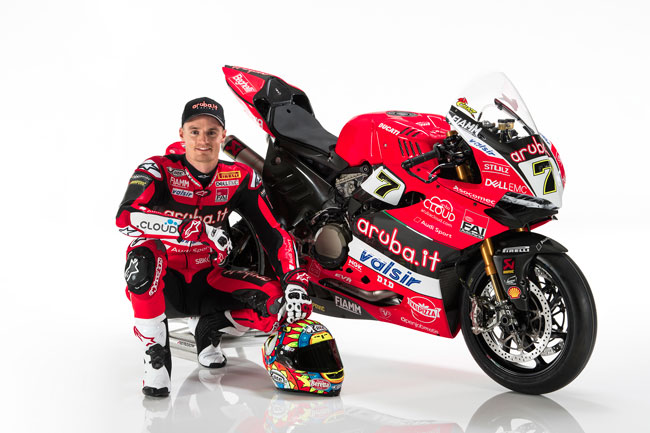 Broadcasted as part of the exciting 2018 launch and livery reveal at the Aruba data centre in Milan, FAI have announced their increased involvement with the aruba.it racing team, now official sponsors of the entire team.

Chaz Davies and Marco Melandri are back for 2018 having spent much of their “down time” prepping for the upcoming season. Michael Rinaldi who claimed the World Superstock 1000 title is a welcome addition to the Ducati WSBK family, forming Aruba.it Racing – Junior team. The 22 year old will be competing in all European rounds which will bring an interesting dynamic to some of the most anticipated races.

In usual Chaz style, the Welshman has bounced back from yet another bout of injury, this time from a knee sprain, picked up on day one of testing in Jerez (November 2017). Fast forward a couple of months and Team Aruba have completed their pre-season testing and all necessary tweaks to the 2018-spec Panigale R.

“It will be an emotional season. This is my fifth year on track with the Panigale R. I’ve won several races with this bike, which triggers many special memories, so it will be an honour to properly send it off before the Panigale V4 debuts on track.

The injury sustained last November has kept me busy during the winter break. I worked hard to make sure I’m ready for the season opener. The new rules for sure will make it more interesting for the public. We just need to do our homework, but I don’t see any reasons why we shouldn’t be as competitive as in the past. We’re working hard and there are upgrades in the pipeline for Phillip Island. We’re ready to battle.” – Chaz Davies

The newly expanded team are more confident than ever and are eager to start the season at the iconic Phillip Island track in Australia on 23rd – 25th February. To keep up to date on the season and to catch a glimpse of the phenomenal photography from each of these events, sign up the new monthly FAI Focus via faiauto.com.