As partners of all kinds gear up for the annual celebration of love and relationships that is St. Valentine’s Day, the fraught state of relationships among the ‘partners’ who share the roads of Ireland is clearly shown in a recent survey of some 1,050 respondents across the country.

The ‘Sharing the Road’ survey, organised by Continental Tyres, covered a range of road users including pedestrians, car drivers and truck drivers.

A key topic that emerged from the research is that, as in any relationship, communication is vital for all of the road-user partners. ‘Signalling’ or indeed, the lack of signalling to inform your other road partners of your intentions, was highlighted as the top ‘most annoying habit’ of other road users. 75 per cent of car drivers; 60 per cent of truck drivers; and 64 per cent of pedestrians all singled out ‘a lack of signalling’ as their number one pet peeve. 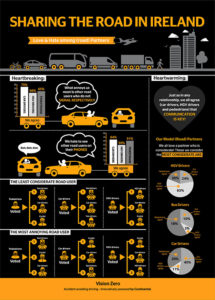 Pedestrians seem to experience considerate acts from a wider range of road partners than either car or truck drivers. When asked who is the most considerate road partner, nearly one in ten pedestrian respondents (8.5 per cent) said cyclists; 29 per cent said car drivers; and 38 per cent said a mix of truck or bus drivers.

And if any road user is set to get a Valentine’s card this year, it’s bus drivers who are considered the safest road users by motorists, truck drivers and pedestrians.

Commenting on the survey, Tom Dennigan of Continental Tyres Ireland said: “Many of our respondents admitted that they are ‘multi-users’ of the road with many often either cycling, driving a vehicle or using the roads as a pedestrian. That familiarity with the challenges of other road users surely encourages empathy,

“Just as in any relationship and particularly so at St. Valentines, empathy is important. That is one of the strong positives that I take from the results of our survey. The level of empathy that is engendered when road users experience the road in more than one guise: e.g. as a pedestrian, cyclist and perhaps a van, truck or car driver; that makes them more considerate road partners. 84 per cent of pedestrians said that ‘multiple road-users’ are more considerate. 68 per cent of car drivers and 50 per cent of truck drivers concurred with that view”.

“It’s incredibly positive that, despite the everyday annoyances that people experience, there is a desire to understand how others use the road. As identified in the survey, better training and education is being called for by road users and this is something we are addressing in our Vision Zero strategy to eliminate collisions and fatalities.

“At Continental we develop technology which has the safety of all road users in mind. Whether that is tyres across all vehicles, from bicycles to HGVs, or intelligent braking technology such as Autonomous Emergency Braking (AEB). We even work with adidas to provide extra grip on their running shoes. So we really are with road users every step of the way.”
“Simply by sharing the same space, road users are unavoidably connected – just as motorists and cyclists are linked by the one thing that connects them to the road – their tyres.