Sealey is celebrating its 40th year in business this year and to celebrate it has unveiled details of a special promotion.

The promotion launches on February 1 and runs until the end of April, Inside, there’s some exclusive pricing on a selection of over two hundred of its most popular products and discounts up to 55 per cent.

Sealey would like to give a huge thanks to its customers for their continued support over the last 40 years. 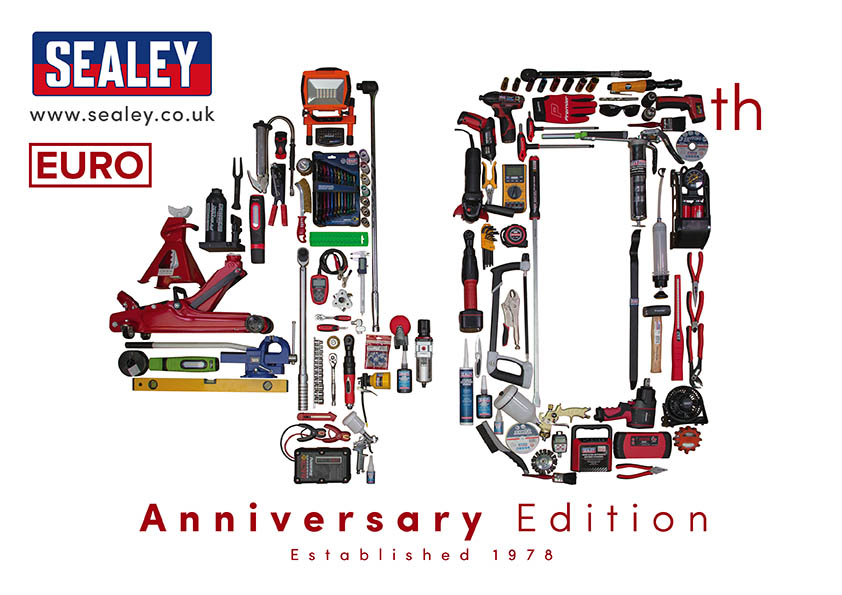 This promotion features Sealey’s new Anniversary Edition products. The 3 and 4 tonne Trolley Jacks on page 5 are available in three colours – yellow, orange and green. The Rocket Lift feature brings the lifting arm into contact with the jacking point with minimal pumps and these models come with Polyurethane wheels for smoother manoeuvrability and for prevention of damage to the workshop floor. Also included is a magnetic wheel nut retention tray and a 2 Year Warranty (2nd year is subject to T&Cs and warranty registration).

Colour co-ordinating 3 tonne Axle Stands which are sold in pairs are also available. They are heavy-duty to safely support vehicles for extended periods of time and have large saddles for good load distribution. The heavy gauge steel frame and welded construction gives superior strength and safety, and all stands feature captive, multi-position pin load support.

The LED3605RA inspection lamp is supplied in a limited edition 40th anniversary box and has an exclusive patented design which is owned by and registered to Sealey. It’s unique and innovative 360° swivel and tilt function enables the light source to be positioned in any direction.

Each lamp houses eight super bright SMD LEDs which provide up to 300 lumens output with 120° spread of light. It includes an additional high power 1W LED directional torch and features a 360° swivel hook on the back of the light and a super strong rubber covered magnet on the base which allow for hands-free operation. Powering the unit is a high quality 2.2Ah Lithium-ion battery for longer life, no memory effect and a much slower discharge than traditional Ni-MH batteries and is supplied with a micro USB charging port.
For more details contact www.hba.ie