Close to £500,000 has been paid out in Northern Ireland as compensation to drivers of vehicles damaged by potholes in the last two years. That’s according to figures from their Department for Infrastructure (DfI).

SDLP Roads spokesperson Sinead Bradley MLA said: “As maintenance budgets fall in the absence of Ministerial guidance, compensation claims are through the roof, bleeding resources that could be invested in infrastructure upgrades. 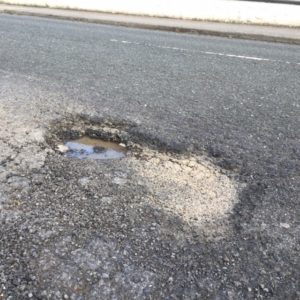 “The Department for Infrastructure has told me that they are now operating on a reduced maintenance service. What this means in practice for road users is that the depth for repairing potholes on roads with a lower traffic flow has doubled to 4 inches. That means cars will have to navigate ankle deep craters before anything is done about it.

“There’s a real issue of road safety here. If something isn’t done, the potholes will get bigger and the compensation claims will increase. There needs to be direct Ministerial guidance that can only be provided by a functioning government.”

And the Alliance MLA, Kellie Armstrong claims that rural roads in particular have been identified as being at risk.

She said: “Unfortunately, with the projections for budgets being as they are, instead of seeing the multi-million-pound investment in our roads which is needed, we will be lucky if we get a fraction of that. This is a consequence of protecting health and education among other areas, as well as having different priorities from the block grant.

“There has been talk of turning off all the street lights in a few years because there we simply won’t be able to afford to keep them on. So if that is the case, unfortunately most rural roads can be forgotten about, as main trunk roads and urban to urban roads will then be prioritised.”