Logistics and parcel carrier UPS is one of several US firms supporting the development of full-electric trucks, following a reservation for 125 of Tesla’s Semi tractors to join its 8,500-strong worldwide fleet.

The company is working towards its target of reducing absolute greenhouse gas emissions from global ground operations by 12 per cent by the year 2025, which will be advanced significantly following the introduction of the Tesla vehicles. 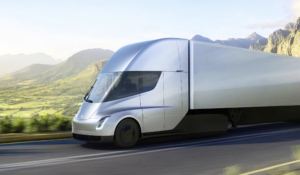 Further goals for UPS include 25 per cent of its electricity consumption to come from renewable sources by the same year, 25 per cent of its new vehicles to be alternatively-fuelled by 2020 and 40 per cent of all ground fuels to be from sources other than petrol and diesel by 2025, an increase of over 19 per cent compared to 2016. UPS has also supplied Tesla with real-world data in order to assist the firm in assessing expected vehicle performance over the UPS duty cycle.

The American brewer Anheuser-Busch is another firm that has committed to full-electric trucks in the future, having ordered 40 Semis from Tesla. The company has announced that the integration of the Tesla vehicles will help to reduce its operational carbon footprint by 25 percent within seven years.