The Denso sponsored Team Land Cruiser (TLC) overcome mud, water, sand and some stiff competition to win one of the toughest events in motorsport.

Since its inaugural competition in 1978, the Dakar Rally has made a name for itself as one of the most gruelling two weeks in the world of motorsport and this year proved no different, with over 40 per cent of vehicles having pulled out at the halfway point of the competition.

Denso partnered with a team well versed in victory in past Dakar races for another consecutive year – Team Land Cruiser Toyota Auto Body-. This year TLC piloted two Land Cruisers and competed in the Production category.

Despite a few hair-raising moments the team were to triumph over the obstacles thrown at them and storm to victory in the 9,000km race across South America which took the Land Cruisers across the dunes of Peru, the mountains of Bolivia and the mud banks of Argentina.

The vehicles featured a reengineered front and rear design and a V8 biodisel 1 VD-FTV engine which runs on biodiesel and a mixture of vegetable oil and algae.

Car #328 was driven by the French winner of last year’s Production category and newest member of TLC, Christian Lavieille and his navigator Jean-Pierre Garcin. In car #337 sat Japanese driver Akira Miura who raced alongside French navigator Laurent Lichtleuchter. This was the third rally for the pair, who were looking to improve on their second place finish in 2017.
Stage one was a shorter route taking the race from Lima to the soft dunes near Pisco, Peru. The team got off to a storming start, with Christian Lavielle and Jean-Pierre motoring to a first place win with Mirua and Lichtleuchter not far behind in second. 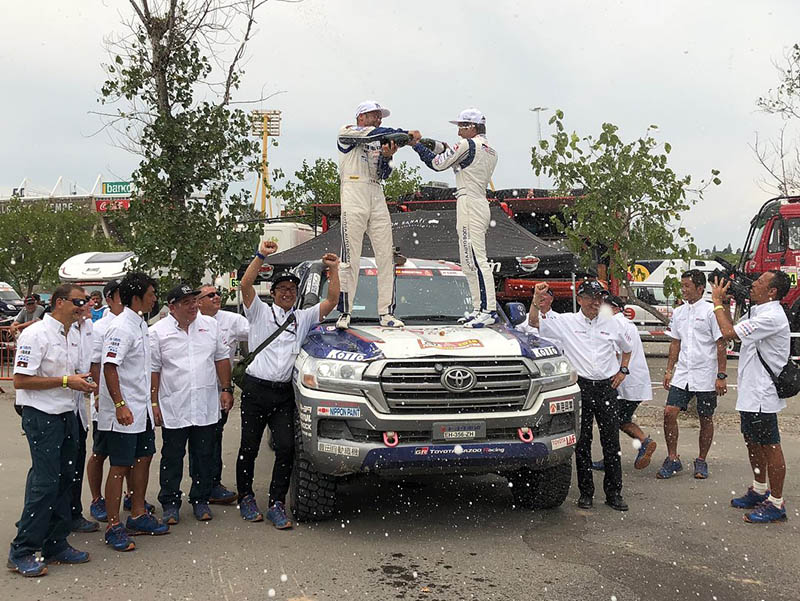 Stage two was the Pisco loop, a 267km long ‘lap’ raced entirely on dunes. After a gruelling six am start and some minor setbacks, the TLC drivers once again proved they were on winning form, finishing in the top two positions to make it two wins out of two for the team.

Stage three saw the championship travel from Pisco to San Juan de Marcona, Peru across yet more dunes which put TLC at risk of rollovers if the slopes were miscalculated. Despite the hazards, TLC team-mates #328 Lavielle and #327 Mirua snatched three out of three top spots in the Production category, a truly impressive performance by both machine and drivers.
Stage four demonstrated why the championship has earned its name as the world’s trickiest endurance race as it took drivers on the San Juan de Marcona loop of Peru. The length of the 330km route was littered with sink holes, rocky terrain and tricky canyons all of which could spell disaster for vehicles at any time. Unfortunately luck was not on the side of last year’s Production champion Lavielle, who was forced to bow out of the race in his first competition for team TLC. This left Mirua to carry TLC’s hope into Stage Five which left racers facing the tricky sands from San Juan de Marcona to Arequipa, Peru. Mirua did not let the pressure get to him however, and following Peru held on to first position in the Production category

From sand to mud, stage six took the surviving TLC team across the rocky mountains of Bolivia, navigating through pools of murky water in the 4,800 metre climb above sea level. TLC proved once again they were not to be perturbed by the loss of Lavielle, and overcame tribulations to make excellent progress in the Production category with Akira overcoming the wet conditions to secure another first place for #337.

Stage seven took the Bikes, Quads, Trucks and UTVs from La Paz to Uyuni, Bolivia, and contained a 425km high-altitude race towards Uyuni. The route was peppered by heavy rainfall making conditions even harder but once again TLC showed its resilience and pulled through with Mirua taking poll position and leaving him set for a podium finish at the final stage in Cordoba.
After stage nine, which stretched from Bolivia to Argentina, was cancelled due to heavy rainfall, TLC did not let this slow their tracks in Stage 10. Racing from Salta, Argentina back into Belén, Peru, Miura’s good form showed no signs of stopping as he cruised to another first place finish for TLC’s lucky number #337.

Stage 11 got hearts beating before it had even started as the infamous dunes of Fiambalá which had laid claim to many racers of previous Dakars loomed on the horizon. But TLC’s Miura and Lichtleuchter remained focussed and their partnership remained on a winning streak as the duo took first position in the treacherous stage. Production victory in Dakar 2018 was now in sight.

Stage 12 marked the Chilecito to San Juan, Argentina stretch and contained a number of tough river crossings as well as harder roads covered in rocks – delivering numerous obstacles for the racers. Yet again the course was traversed expertly by TLC as Miura stormed to another first place victory within the Production category.

The penultimate 13th stage led team TLC from San Juan to Córdoba in Argentina on a route that stretched on for 369 km across particularly fast trails of hardened soils, inviting vehicles to put their engines to the test and regularly reach top speeds. Unlucky for some, number thirteen was far from this for team TLC as Mirua and Lichtleuchter took full advantage of the faster tracks to cruise into first place for the sixth time, and leaving just 120km between them and the Dakar Production crown.

Stage 14 and the final part of the 2018 Dakar Rally took competitors round a 120km loop of Córdoba, incorporating multiple river crossings and a number of stone hazards. The unstoppable performance of the TLC vehicle continued, as it ploughed on to take its final win of the championship before being crowned overall champion of the Production category.

Despite the loss of teammates Christian Lavielle and Jean-Pierre earlier in the race, 2018’s Dakar rally was mission complete for Akira Mirua and Laurent Lichtleuchter as they brought home a fifth consecutive Dakar win in the Production class for TLC as they once again demonstrated the resilience, speed and handling of the Toyota Land Cruiser and its Denso components.