Continental’s range of truck tyres and its ContiPressureCheck tyre pressure monitoring system featured on two on the first three trucks home in the recent Dakar Rally.

Eduard Nikolaev’s crew from the legendary KAMAZ-Master team finished the race in Argentinean Cordoba and won the truck category of the Dakar Rally 2018.

The crew’s final result after 14 stages was 54 hours, 57 minutes and 37 seconds, nearly four hours ahead of competition. 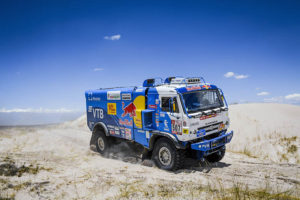 The other crew of KAMAZ‑Master, headed by Airat Mardeev, was also successful: they secured third place in the race.

The second place was held by Siarhei Viazovich’s MAZ team from the Republic of Belarus.

The trucks featured premium-technology Continental HCS 14.00R20 construction tyres as well as ContiPressureCheck, the innovative tyre pressure and temperature monitoring system, which was not customized for the race but used in the same way that standard cargo and commercial vehicles can already use it.

ContiPressureCheck constantly monitors air pressure and temperature in tubeless tyres with the help of sensors and can be used on multi-axle cargo and commercial vehicles with any wheel arrangement.