After three very successful consecutive years and consultation with exhibitors plus surveys of visitors and readers of AutoTrade.ie, the Auto Trade EXPO has moved to alternate years.

The dates for the 2018 Auto Trade EXPO are Saturday, 20th and Sunday, 21st October. The heavy early pre-booking of stands for 2018 (including those covering the tyre industry) is really the final endorsement of the success of the Irish auto industry’s aftermarket exhibition, the Auto Trade EXPO. 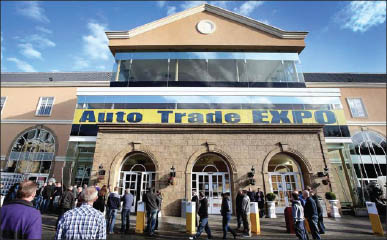 There will be 175+ stands including many new exhibitors, which will again make it the largest auto trade exhibition ever to take place in Ireland. There will be lots to see and do for all sectors of the Irish auto aftermarket.

Last year, a new record attendance of 7,840 people for the two-days at the South-West Dublin venue meant that that exhibitors reported huge numbers of quality visitors to their stands and expressed their delight at the business done and contacts made over the weekend.

Numerous new products will be launched at the Auto Trade EXPO, and you can expect several new distributorships to be announced there too. From the great levels of interactivity with exhibitors at their stands to the special TechTalk.ie Zone, where many of the top trainers from the UK and Ireland will present throughout the weekend. This feature will be enhanced further for next October.

The Citywest Exhibition Centre and Arena features the best facilities in Ireland. Easy access from the motorway and free parking, prove very attractive for all visitors and exhibitors alike.

There will be an updated free Auto Trade EXPO App again for this year after it proved very popular last year. Eemember, you can see also view the video of all Auto Trade EXPOs on the website at: www.AutoTradeExpo.ie