Nissan has hinted at a broader range of electric commercial vehicles with a new refrigerated e-NV200 concept.

Shown for the first time at last week’s Tokyo Motor Show, the e-NV200 is based on the current small commercial model but adds a refrigeration system to the load compartment which is powered by a separate 12kWh battery pack, leaving the 24kWh drivetrain battery unaffected. Nissan says the concept’s size and efficiency means it has the capability to deliver chilled produce into urban centres. 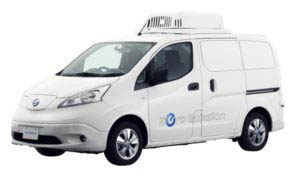 Although only a concept at this stage, the production e-NV200 is one of the most popular electric commercial vehicles in Europe and Nissan already offers a refrigeration conversion for the standard vehicle. Nissan also displayed its Paramedic concept on the stand which has a conventional combustion engine but uses a lightweight 1.6kWh battery pack to drive life-support systems in emergency situations in remote areas.