The first right-hand-drive fully-electric Volvo bus has begun a demonstration tour of the UK, where it will be used in towns and cities along with its OppCharge opportunity charging system, which operates via a pantograph onto the vehicle’s roof. 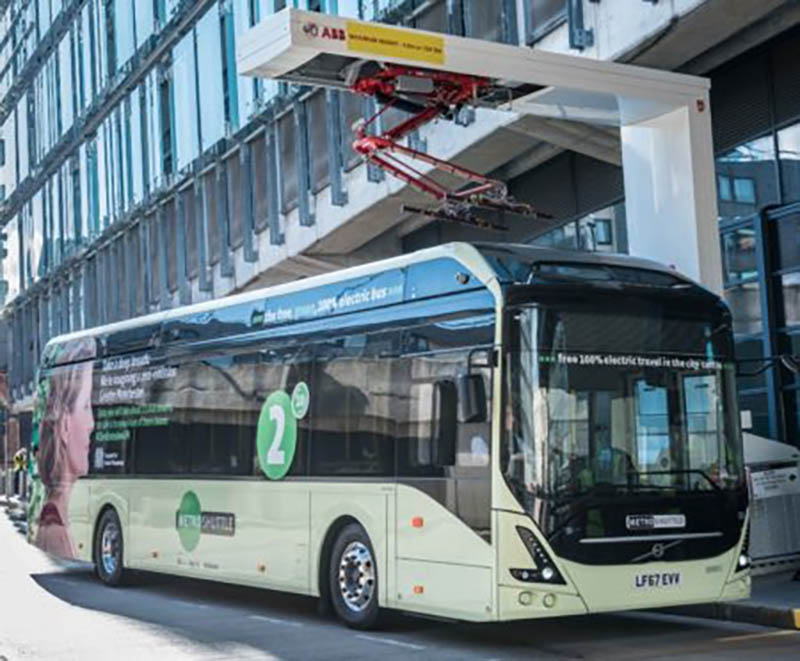 The bus begins its demonstration tour in Manchester, where it will be used for eight weeks on Transport for Greater Manchester’s (TfGM’s) Metroshuttle 2 route, a free service connecting key locations in the city.

The zero emission, fully electric bus will be recharged on the route via the OppCharge pantograph supplied by ABB. Installed at the Shudehill Interchange, this is the first time the system has been used in the UK, giving the possibility of 24-hour continuous operation.

Its first passenger was the Mayor of Greater Manchester, Andy Burnham, who used the launch to announce his ‘Congestion Conversation’ campaign to look at ways of reducing traffic in and around the City of Manchester.

Nick Page, Managing Director of Volvo Bus, said, “We are very excited to see the Volvo 7900e start its first demonstration period here in Manchester.  Knowing how committed Mayor Andy Burnham and TfGM are to improving air quality, we are confident the 7900e and accompanying technologies can go a long way to helping them achieve their goals.

“Part of the Volvo Electromobility range, the 7900e has already proved its worth throughout Europe, having been operated successfully in countries including Sweden, Germany, Belgium and Luxembourg and it is great to be seeing our full electric and emission free bus making its debut in the UK.

“Increasingly these vehicles and technologies are creating a new era in passenger transport when used in conjunction with each other to deliver a true customer focused solution for operators.”
Councillor Andrew Fender, Chair of the Transport for Greater Manchester Committee (TfGMC), said, “It’s the first time this type of bus and charging technology has been used in the UK and so to have it debuting in Manchester is a real coup. We’re going to look very closely at how it performs over the course of this trial and I’m really looking forward to seeing the results.”

First introduced in mainland Europe in 2015, the Volvo 7900e provides up to 80% lower energy consumption than an equivalent sized diesel bus. It is a two-axle bus with electric motor and four high capacity 19 kWh Lithium-ion batteries and offers zero tailpipe emissions.
Following the Manchester trial, the vehicle will be heading for a demonstration at London’s Heathrow Airport for a period of eight weeks. This will involve transporting airport staff and customers to and from the carparks and terminals.

The first Volvo 7900e buses in regular service in the UK will begin operating in early 2018 with Transdev Blazefield in Harrogate, North Yorkshire.