The trolley bus technology of overhead wires and spring-loaded trolley poles is being re-introduced by operators and governments around the globe in a move that could potentially offer emissions-free transport for the freight industry.

Although not seen in the UK since the 1970s, the system has remained popular in Europe for passenger transport and its use is spreading to large commercial vehicles. 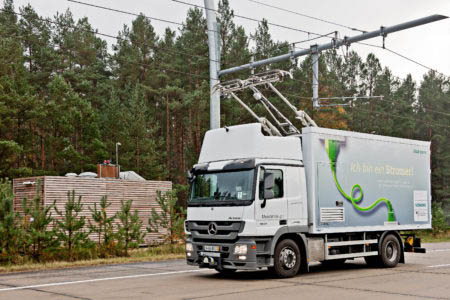 One such scheme is being trialled in California, where the twin ports of Los Angeles and Long Beach have been equipped with a 2-mile section of overhead lines and three trucks, pulling large loads in excess of 26 tons under electric power. Two of the trucks are hybrids, one also running on CNG while the other is a diesel-electric hybrid, giving them additional range beyond the overhead line system.

Siemens has already staged their own European trials, beginning with a 1.6 mile stretch of German road in 2016 as well as a 6 mile eHighway on the autobahn serving the Frankfurt Airport cargo hub. The system allows vehicles to run purely on electric power at key interchanges, reducing emissions where congestion and pollution tend to be at their highest.

Combining this infrastructure with charging terminals would also allow longer journeys between hubs and minimise the amount of time spent running on fossil fuels alone. Although not without its challenges – chiefly the estimated £4.5 million per mile cost of installing overhead lines and associated infrastructure. – As the technology regains traction it could be used as a supplementary system working alongside other zero emission initiatives.