Toyota’s first fuel-cell truck has begun commercial operation following a long period of private testing, while the company has promised to run the programme ‘indefinitely’.

Designed to evaluate operating costs and reliability, Toyota says that the fuel-cell truck trial will hopefully show a viable alternative to conventional fossil fuel-powered vehicles and pure electric alternatives coming onto the market. 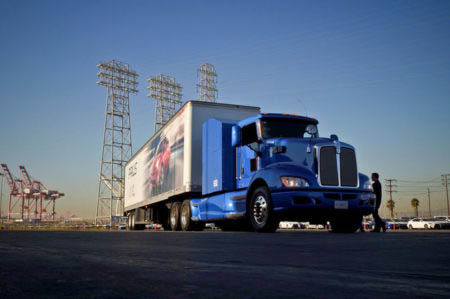 The fuel-cell technology takes compressed hydrogen from on-board tanks and splits it into protons and electrons, generating direct current electricity that is used to power an electric motor. Unlike battery electric vehicles however, the fuel cell stack that generates the electricity is compact.

Road testing began after the first unveiling in April, and public testing in the US started in August around the Los Angeles and Long Beach areas that the technology will initially serve. Later this month, the truck will commence commercial duties, undertaking trips in excess of 100 miles with large payloads.

The truck uses significant portions of proven Toyota technology, most importantly two examples of the fuel stack that is used to power the Mirai passenger car. Two customised electric motors are used to deliver that power, with 661bhp and 1327lb ft of torque available, enough to provide comparable performance to a conventional diesel-powered vehicle, and better acceleration.

With 40kg of hydrogen on board, the truck currently has an operating range of 150 miles with a 26-tonne trailer, increasing to 240 miles with a 60%load factor. Toyota says refuelling time for the truck is less than 40 minutes.