Solar energy tech firm, eNow, has demonstrated the efficiency of a new solar-powered refrigeration technique, which is has named ‘Rayfrigeration’.

Replacing conventional diesel-powered Transport Refrigeration Units (TRUs), eNow’s zero-emission solarunit has undergone extensive testing over a five month period, during which it recorded significant improvements over conventional methods. During the test period nitrous oxide emissions were cut by 98%, carbon dioxide by 86% and particulate matter by 97%. 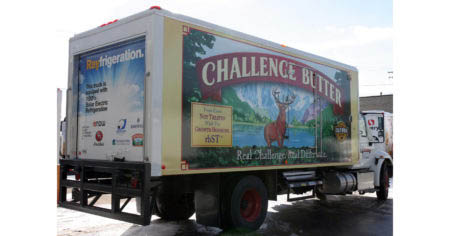 Using both cold plates and a high-capacity battery system the eNow TRU system is replenished from a charging point at the depot overnight. During the daytime delivery,the roof-mounted solar panels maintain a constant flow, enabling the refrigeration unit to keep a stable optimum temperature for the duration of the delivery cycle.

Calculations by eNow show that during a four day week with an average delivery day of around seven hours, CO2 emissions were cut from 1145kg to just 72kg per week. The firm also claims a substantial reduction in operating costs of up to 90%, due to the reduced cost of fuel and of maintaining the diesel engine.

Jeff Flath, President and CEO of eNow, said, “The Rayfrigeration product is an important step forward in reducing emissions while maintaining the highest levels of efficiency and customer satisfaction for companies delivering perishable goods.”

“eNow’s solar technology is powerful, reliable, and efficient, and more than up to the task of providing emissions-free energy for critical tasks such refrigeration of fresh foods, in even the most challenging conditions. We are proud to be a part of this important project.”