Nissan has claimed a new Guinness World Record with its updated e-NV200 electric van, with the help of brand ambassador and actress Margot Elise Robbie.  Offering increased range and versatility, the e-NV200 towed an eco-house mounted on a trailer in order to set the record, subject to official confirmation from Guinness. 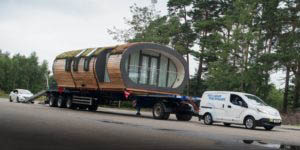 The e-NV200 has been upgraded in line with the latest generation Nissan Leaf with a 40kWh battery, which gives a claimed range increase of 60%, equivalent to 174 miles under the NEDC measurement. Despite the increased capacity, the battery itself is physically no larger than before, meaning both payload and load space remain unchanged. Capacity has increased but the single electric motor remains as before, delivering 108bhp and 187lb ft of torque for strong urban performance.

The revised e-NV200 was announced at Nissan Futures 3.0 in Oslo, Norway, the designated Green Capital of Europe for 2019. At the event, Gareth Dunsmore, Electric Vehicle Director, Nissan Europe, said, ‘With its longer range and excellent cargo capacity, the new e-NV200 is the perfect last mile delivery solution for urban deliveries and collections. Given the huge impact that business deliveries/collections and professional drivers have on air quality and traffic congestion, especially in city centres, helping cut the level of CO2 emissions they create is a vital part of creating a more sustainable future.’