Mercedes-Benz and robotics company Matternet have demonstrated a a van-mounted drone, by using it to automatically deliver a cup of coffee from one destination to another while it was still hot. 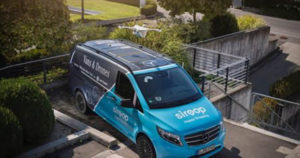 The two companies demonstrated the technology last week at a special event in Zurich, Switzerland, in partnership with Swiss e-commerce retailer Siroop, to show how a combination of vans and drones could be the answer to last-mile deliveries.

The system works by passing an online order on to a merchant, where an employee enters the order details and passes it on to Matternet, the company that has developed the robotic drones, which feeds the GPS co-ordinates into an app.

This in turn means the drone knows the location of the pick-up and the drop-off, enabling Matternet to load the drone. The drone reads the destination information using a QR code on the package, so it knows where to go. Then it’ll fly the goods to the van.

The van, meanwhile, emits a signal to let the drone know where it is at all times. As long as it is within a range of 20Km (13 miles), the drone finds the van, and takes the parcel to it.
The van driver then retrieves the package and delivers it to the receiver’s door.
Mercedes-Benz and Siroop have now committed to a three-week long trial in the Swiss capital, delivering goods of up to 3kg in weight.

The idea is to help e-tailers provide on-demand delivery for customers without the need for more vehicles and drivers, or return trips to a distribution centre. It also removes the need for customers to interact with drones at their front door.

Matternet says it has big plans for the concept, with “van fleets dynamically synchronised with drone fleets for efficient on-demand delivery.”