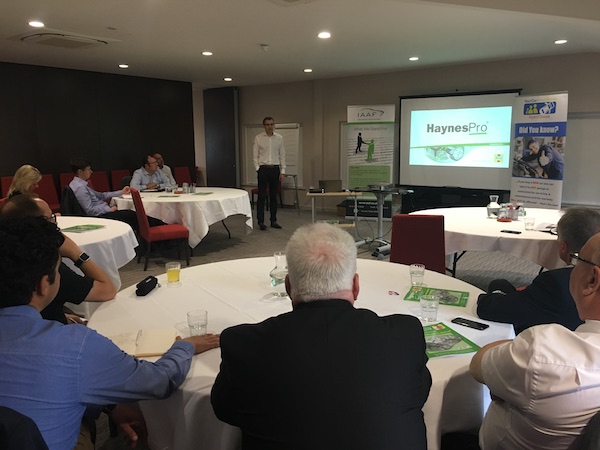 IAAF Membership Development Manager Mike Smallbone again steered proceedings, updating attendees on the latest industry developments and also again welcoming Quentin Le-Hetet, General Manager of GiPA UK, as guest speaker.
Members were updated on current industry issues as well as IAAF’s current developments with the “Connected Car” and “Type Approval”. Smallbone acknowledged the industry’s current ‘deadlock’ position following 18 months of discussion from the C-ITS forum (Cooperative Intelligent Transport Systems) on a technical framework for connectivity on vehicles. Unresolved issues are now being examined by a TRL study and key to the discussion is how to access in-vehicle data, with three technical solutions being put forward.
Addressing the ongoing debate regarding proposed MOT changes, GIPA UK’s Le Hetet also discussed this year’s fall in the number of registrations for new vehicles and the subsequent increase in used car registrations.
Smallbone said: “Now with our third session under our belt, these regional meet-ups are proving to be incredibly well-received by our members, with numbers significantly increasing since the event was launched in March. The feedback we are getting shows that they are already providing real value to members in terms of industry insight. We are expecting another highly engaging session at next month’s briefing.”
The regional sessions begin at 10.00 am offering the chance to network over a coffee, before finishing at 1.00 pm with lunch.
The next meeting will take place at the FPS National Distribution Centre in Sheffield on Thursday 26 October.
As limited spaces are available, IAAF is advising members to book early to avoid disappointment by emailing Ann Silvester at anns@iaaf.co.uk.