The fuel savings Nelson Distribution can look forward to from its first Mercedes-Benz New Actros tractor unit will be magnified by the vehicle’s automatically adjusting, ActivFreddie air deflector, which was developed by Hatcher Components. 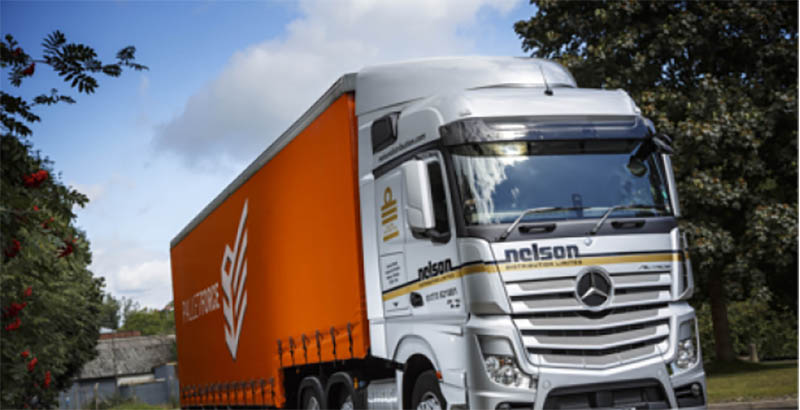 Based in Belper, Derbyshire, family-owned Nelson Distribution provides contract distribution, next-day network pallets and just-in-time transport services to customers from a diverse variety of sectors, among them heating appliance and automotive manufacturers, clothing retailers, paper and packaging companies, and construction specialists. The operator also became a shareholder-member this summer of the Palletforce network, for which it covers a proportion of the Nottingham postcodes and delivers each night into a Burton on Trent hub.

Nelson’s New Actros 2545 BigSpace is powered by a state-of-the-art straight-six engine producing 450 hp and driving through the latest Mercedes PowerShift 3 automated transmission. Supplied by Derby Dealer Mertrux, it has joined a Mercedes-Benz-dominated fleet of more than 30 vehicles, the majority of them 6×2 tractor units, and 70 trailers.

Managing Director Simon Nelson ordered the new flagship during a visit to the manufacturer’s stand at this year’s Commercial Vehicle Show in Birmingham. “I’d heard some very positive reports about the fuel efficiency of the New Actros and as soon as I sat in a BigSpace cab I made up my mind there and then,” he recalls

The operator’s decision to specify the cab roof-mounted ActivFreddie system reflects the differing heights of the trailers which the truck will be pulling. “Most are standard boxes and curtainsiders,” explains Mr Nelson. “But we also have some tall, 4.7m and 4.8m trailers which we use for automotive contracts, as well as some double-deckers assigned to our Palletforce work.”

Developed by Hatcher Components in conjunction with Mercedes-Benz and Cranfield University, ActivFreddie employs a sensor which detects the trailer’s height and automatically adjusts the spoiler accordingly. Meanwhile, pressure sensor monitoring allows the deflector continuously to optimise its position relative to the constantly changing wind speed and direction, while the vehicle is on the move.

Tests have shown that ActivFreddie delivered an 11 per cent fuel saving when pulling a 4.95m refrigerated trailer at 50 mph, compared to a unit fitted with a fixed deflector.

Mr Nelson continues: “Fuel efficiency is a major priority, not only in terms of cost but also because increasingly customers want to know what we’re doing to cut emissions. This investment provides tangible evidence of our commitment to reduce our carbon footprint.”

Before confirming its order, Nelson also carried out its own tests using one of its Actros MegaSpace tractors fitted with a fixed roof spoiler angled for optimum efficiency when pulling a 4.7m trailer. “It saved us one mile per gallon with the tall trailer, but was not good with the 4m trailer due to turbulence issues,” continues Mr Nelson. “Obviously, we could have chosen a manually adjustable deflector but for health and safety reasons we decided against this and opted instead for the fully automatic version.”

He adds: “Mercedes-Benz trucks have a great image and are exceptionally reliable; we know we can run them for up to one million km with no problems at all. What’s more, there’s always a market when we come to sell them, and the residual values are invariably high.

“The service from Mertrux is fabulous too. We maintain the trucks in our own workshop but the dealer’s parts back-up is excellent, while Managing Director Ian Marshall and his team are very customer-focused.”

Nelson Distribution was founded in 1949 by Jack Nelson, grandfather of the current Managing Director. The company moved in the mid-1980s to its current, five-acre site, which has a 30,000 sq ft warehouse. Simon Nelson spent 16 years with Exel Logistics, which he joined as a graduate trainee, before taking the helm in 2004, when his father John became Chairman; Simon’s brother Jason also works for the family firm, as Head of Systems and IT.

Concludes Mr Nelson: “The fact that we own our premises, along with most of the vehicles and trailers, and some commercial property which we lease out, means we have a very strong balance sheet. Our aim now is to grow the business significantly, and to do so in partnership with Mertrux and Mercedes-Benz.”