An articulated cement mixer is helping to reduce the number of deliveries and rigid cement mixer trucks on the road, test have proven. 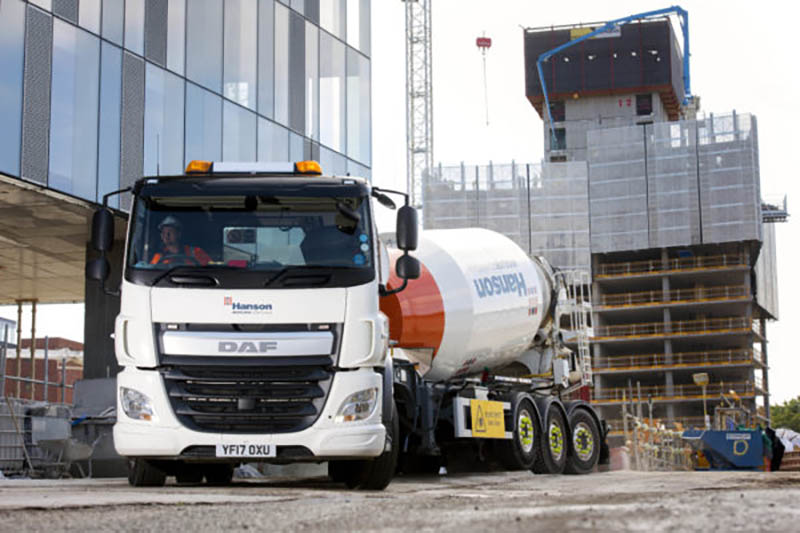 Aggregates, cement and ready-mix concrete producer, Hanson UK, is testing a Muldoon trailer and McPhee mixer based on those used in Australia. The articulated unit has rear-wheel steering and is pulled by a DAF CF 440 FTG 6×2 mid-lift tractor unit.

Hanson says the combination has been a ‘resounding success’ in reducing its traffic movements, boosting delivery volumes while at the same time reducing the number of the company’s rigid mixer vehicles on the road.

The combination has already conducted in-service operations in London, Manchester, Leicester and Burton-on-Trent as the company gathers evidence to support a fleet-wide shift to truck and trailer operations, which it believes will reduce cost and environmental impact.

Hanson Regional Transport Manager, Tim Sage, said, “The truck / trailer combination has been a resounding success on sites across the UK – our operations team all responding with positive feedback – there’s certainly the potential for more units to come into service.”
He added, “We’ve traditionally used 6×4 and 8×4 mixers which give us 6-metre and 7.5-metre volumes respectively. This new artic configuration, however, can carry 12 cubic metres on certain products, potentially doubling the carrying capacity on one vehicle, and halving the number of vehicle journeys”

“The DAF and Muldoon-McPhee set-up utilises the Euro-6 engine’s Power Take Off (PTO) to power the drum rather than a separate donkey engine, thereby cutting emissions and noise as well as improving payload, thus maximising environmental benefits.”

Hanson is also a Gold member of FORS, the Fleet Operator Recognition Scheme. This level of accreditation means the company operates to the very highest levels of best practice set against stringent criteria laid out in the FORS Standard.