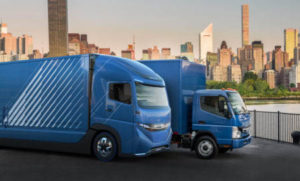 The E-Fuso Vision One, has the potential to be taken from concept to production within the next four years as a sister vehicle to the eCanter medium duty truck, which went into limited production in Portugal earlier this year.

The E-Fuso Vision One is a heavier duty truck and beats the 100km range of the eCanter on a full charge, promising a 350km/217 mile range instead. It has a battery with a 350kWh capacity, capable of a fast charge in less than three hours and with a gross vehicle weight of 23 tonnes, it is capable of carrying a payload of 11 tonnes.

Speaking at last week’s Tokyo Auto Show, Fuso CEO Marc Listosella said, “In the future, all our electrified vehicles will run under the name of E-Fuso, our new product brand dedicated exclusively to electric trucks and buses.”