Duckhams, the much loved oil brand, known around the world for its distinctive green hue has been inextricably linked to British motoring heritage since 1899. Duckhams invented Europe’s first ever Multigrade oil, Duckhams Q in 1951, an advancement that changed the face of automotive lubricants forever. Now, in 2017 the company will make its long awaited return.

Duckhams will re – launch with an initial focus on oils for classic vehicles, with the intention of expanding the range into motorsport and modern vehicles in the near future. Duckhams, which remains one of Britain finest exports reaching over sixty countries worldwide, was specified by almost all UK vehicle manufacturers responsible for producing cars from the golden era of motoring. MG, Morris, Wolseley, Rover and BMC all recommended that you didn’t use anything else! 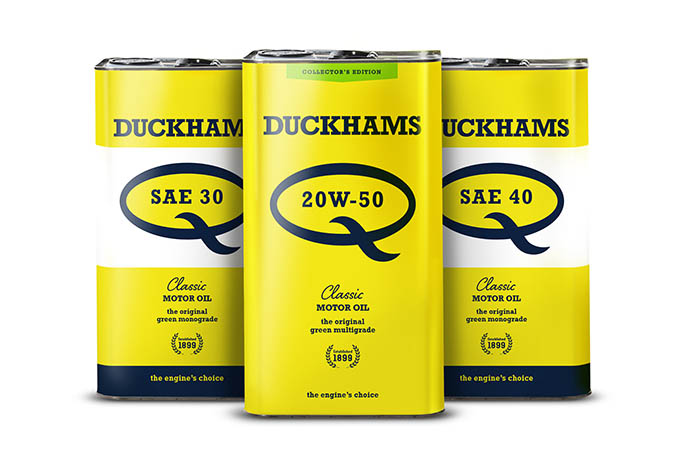 Motoring fans cannot fail to be impressed by the achievements that Duckhams has to its name. Through the further development of Q20w-50 with Morris, they made the ground breaking compact design of the Mini possible, through providing Morris with oil that could cope with lubricating both the engine and gearbox. MG broke land speed records in Utah in the early 1950s, Jacky Ickx won the race of champions at Brands Hatch in 1973 and James Hunt took his first F1 victory for Hesketh, – all with Duckhams Q in their sumps!

Whilst the oil remains true to it’s history by retaining the famous and distinctive green hue, Alexander Duckham and Co. Ltd, has sourced the very best raw materials for a perfect combination of heritage and innovation to create motor oils that deliver unrivalled protection and superb performance for classic and vintage engines.

Martin Gough, Director for Classic, Motorsport and Industrial explains, “As car fans, we are fiercely proud of our contribution to British motoring heritage. We are especially looking forward to supporting the clubs and enthusiasts that make up our vibrant classic car community. Duckhams has succeeded since 1899, precisely because of a fantastic combination of experience, knowledge and innovation, which we will continue.”
Martin Gough adds, “We have painstakingly recreated the green colour to Duckhams Q20w-50 Multigrade that everyone knows and trusts, but have ensured that the formulation has moved with the times to offer the latest technology to protect cherished engines, both out on the road and in winter hibernation.”

At the NEC Classic Motorshow, held in Birmingham, 10th – 12th November 10-12, Duckhams will re – launch with two mono-grades, SAE30 and SAE40 and their well-respected ground breaking multi-grade, Duckhams Classic Q20w-50.

Classic car fans lucky enough to get through the doors early at the NEC Classic Motorshow, will be given the opportunity to purchase collectors limited edition cans.

Duckhams have never shied away from pushing their lubricants to the max. The list of names that have been associated with the brand over the years reads like a who’s who of motorsport; John Surtees went to Formula 1 with their backing, Ari Vatanen won the World Rally Drivers Championship with a Duckhams Ford Escort and through a long association with Formula Ford team Van Diemen, Duckhams launched the careers of Nigel Mansell, David Coulthard and the legendary Ayrton Senna.

At the November NEC Classic Motorshow, Duckhams will celebrate their motorsport heritage once again, by displaying the Ford RS500 British Touring Car, driven to victory by none other than Tim Harvey. The 560-brake horsepower saloon car is thought to be the only one left in the world in original BTCC specification.

Alongside the RS500 will be a chance to meet another BTCC ace, Welshman Karl Jones. Karl Jones started racing in 1981 and stepped up to the British Touring Car Championship (BTCC) in 1988, competing for two seasons in his Duckhams backed Group A Ford Sierra RS500. Karl will be on hand to share his memories of racing for Duckhams and explain the pivotal role that Duckhams played in his career.