Tesla is set to launch its first autonomous electric lorry next month as the company attempts to break into the commercial vehicle market.

The Tesla Semi truck is scheduled to be unveiled on October 26 and is expected to have a working range of only 200 to 300 miles, making it more suitable for inner-city transport than long-distance motorway haulage. 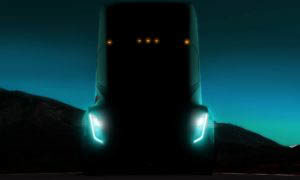 Tesla, which is known for its pure electric plug-in Model S, X and 3 cars, has had its sights set on producing a commercial vehicle for a number of years.

He added, “We believe the Tesla Semi will deliver a substantial reduction in the cost of cargo transport, while increasing safety and making it really fun to operate.”

The Semi truck will be a battery-powered vehicle offering the benefits of reduced emissions but in terms of its range it is eclipsed by conventional diesels can that travel up to 1,000 miles on a single tank of fuel. Critics have also pointed to the use of battery technology that, potentially, takes up payload volume and adds weight.

Tesla has reportedly shown prototypes to early fleet customers, while the Semi vehicle itself is expected to reach production in 18 to 24 months’ time.