A hydrogen engine retrofit company has completed an integration study that could provide additional fuel cell power to electric vans. 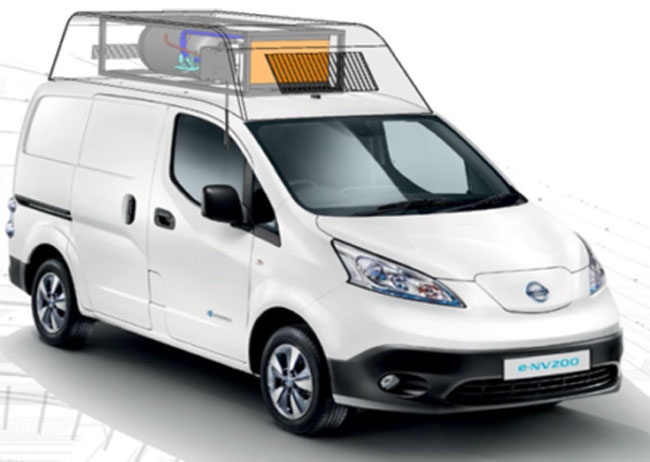 ULEMCo’s zero-emission fuel cell unit is designed to be fitted to Nissan’s standard electric e-NV200 van to provide an additional power source. It takes the form of a fuel cell-based unit that will extend vehicle range to more than 150 miles when fully laden.

The unit is unique in that, unlike previous fuel cell concepts, it claims not to compromise the van’s usable load capacity. The loadspace remains the same thanks to ULEMCo’s fuel cell RX power module being mounted on its roof, providing power via the battery to support the van’s existing drivetrain.

Using a 12kW fuel cell and 1.6 kg/day on-board hydrogen storage capability, the van is claimed to have almost twice the range of the standard e-NV200, measured to NEDC standards, without sacrificing load space capacity.

ULEMCo’s CEO, Amanda Lyne, said, “We are excited to have completed our integration study for a zero-emission fuel cell extended van. This UK-engineered solution will meet the need for a practical small van in urban delivery operation.”

ULEMCo added the development was significant since the fuel cell electric vehicle is eligible for the Office for Low Emission Vehicles’s (OLEV) recently announced funding scheme for hydrogen vehicles.

The OLEV Hydrogen for Transport Programme was launched last month and will provide up to £23m of grant funding until 2020 to support the growth of hydrogen refuelling infrastructure, alongside the introduction of new vehicles via an open competition for funding.