AJ will assist Trico and its guests throughout this season’s campaign, to ensure they receive the full matchday experience. In his role, he will also represent Trico during other selected company events. 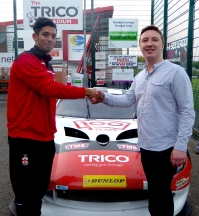 Before joining Redditch United, AJ enjoyed a four-year scholarship in the United States where he captained his college team, Gardner-Webb. After spending time at Brentford as a youth player, AJ worked with Arsenal and Tottenham in an attempt to encourage more fellow Asian and ethnic minority players into the game.

Since signing for Redditch last season, Jung has established himself as an important player for The Reds, having alreadymade five appearances for the club this season and was regularly voted ‘man of the match’ during last season’s campaign.

Trico has been a global leading provider of windscreen wiper blades and systems for more than 100 years and celebrated another milestone in April, as the company unveiled Redditch United’s state-of-the-art Trico Stadium.

AJ said: “I am delighted to be representing a well-renowned company like Trico. This is an exciting time, as the partnership with the brand and the Reds looks likely to propel the club to new heights over the coming seasons.

“The role of ambassador is an honour for me and the club, as we look to make sure that everyone who attends our matches receives the treatment they deserve.”

Redditch United Director, Gary Barak, introduced both Trico and AJ to the club and said: “It’s been a pleasure to work with the Reds, in particular Redditch United Chairman and close friend, Chris Swan, over the past year, and I can see the exciting vision for the club.

“AJ is a talented player and has the personality and credentials to do a great job in supporting Trico off the pitch whilst making a difference on it too.”

Trico’s European Marketing Manager, Sam Robinson, added: “Trico likes what Redditch United is achieving – especially in the local community. The support the club is providing to the public is of great interest to us, which is why we are also helping the Redditch United in the Community project.

“We are looking forward to working closely with AJ and watch on as the Reds bid for a promotion challenge this season.”