This excellent feature on electric vehicles being big news at the moment appeared in SMMT’s TransportNews recently. It looks at the increased focus on reducing emissions in most of the world’s major cities.

But one thing the general public may not realise is that the CV sector is a true pioneer of the technology of tomorrow. Indeed, plug-in vans, buses and trucks are making electric mobility an increasing reality.

The greater size, weight, running costs and the fact that they typically have longer working lives than cars, means that on a per-unit basis, zero-emissions CVs stand to make more of an environmental impact than electric cars. Industry analyst Frost & Sullivan reckons less than 5% of vehicles European roads are commercials, but they account for almost 20% of greenhouse gas emissions, so the potential savings are clear.

Citroen’s electric Berlingo – one of the most established plug-in CVs
Vans are arguably the most established of electric CVs, not least because some companies, such as Gnewt, now operate urban delivery fleets comprised entirely of plug-in LCVs. There has been no shortage of other companies buying into electric vans this year, though; Royal Mail, UPS, North-East Lincolnshire council, defence specialist BAE Systems and home maintenance firm Fortem are but a few of the organisations that have either switched to or increased their plug-in van fleets in 2017.

There’s even more going on at the manufacturing end of things. Within the first three months of the year, the trio of French LCV manufacturers each launched new all-electric vans. Peugeot and Citroen released the Partner SE L2 and the Berlingo Electric L2 550 LX, each of which has 250mm more load length than the existing models, an additional 4m3 of cargo space and a 106-mile range.
Renault unveiled its largest electric van yet, the Master ZE, at the Brussels motor show in January. Due on sale in the coming weeks, it’s aimed primarily at last-mile distribution services, has a quoted range of 124 miles from the firm’s new battery pack. The manufacturer simultaneously revealed an updated Kangoo ZE, which, courtesy of lower weight, saw a 50% increase in range to 168 miles.
Ford announced plans for a 12-month trial of plug-in hybrid Transit Customs at the start of the year, which is due to kick-off imminently, and will see organisations such as British Gas, Addison Lee and the Metropolitan Police put the vehicles to work in Central London. The blue oval has also teamed up with DHL to produce electric delivery vehicles in Germany, while rival logistics behemoth UPS has turned its hand to developing the world’s first hydrogen-electric delivery truck, 17 of which it plans to deploy in Sacramento, California, in 2018, along with a separate series of electric trucks in London’s borough of Camden.

UPS is trialling hydrogen fuel cell technology
Electric buses are big news, too, particularly in London. Less than two months after the inauguration of Europe’s biggest electric bus fleet (routes 521 and 507 out of Waterloo), Transport for London operator Go-Ahead announced plans convert the 360 route, which runs across the south of the capital, to electric power, using vehicles supplied by EV specialist BYD and Alexander Dennis (ADL). 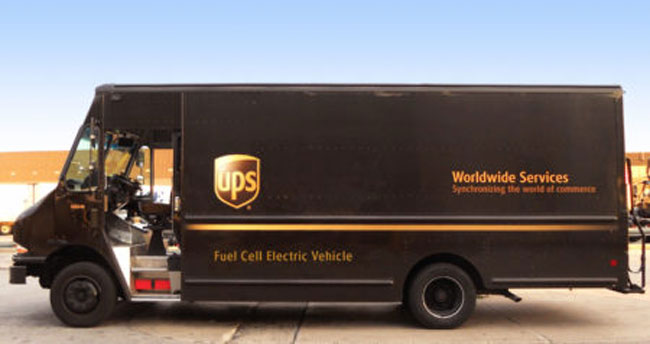 A further 36 BYD/ADL electric buses were given the go ahead in June, as part of a contract with operator London United; due to commence service in spring 2018, they will be based at the operator’s Shepherd’s Bush garage and run on routes C1 from Victoria to White City and route 70 from South Kensington to Chiswick. Another 23 BYD/ADL buses are destined for service on route 46 from Lancaster Gate to St Bartholomew’s Hospital from summer 2018, too.
Outside of the capital, Harrogate became the first UK town to adopt an electric bus fleet with opportunity charging (where the vehicle is charged at intervals during its route, not just at the depot) in February, using single-decker Volvo 7900E Electromobility buses, while the first electric double-decker outside of London, manufactured by Optare, went into trial service in York in August.

Volvo is leading the way with fully electric buses 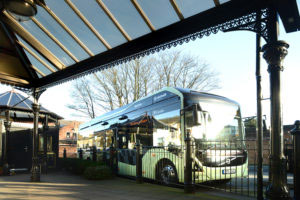 Further afield, the Swedish city of Värnamo will become the first in Northern Europe to have a fully electric bus fleet in autumn.

In May, Eindhoven in the Netherlands saw its fleet of 43 electric VDL Citea single-deckers tot up a cumulative 1,000,000 kilometres since entering service in December 2016. Europe’s biggest single-operator fleet of electric buses (90 Volvo 7900 Electric Hybrids) is set to go into service in the neighbouring Belgian cities of Charleroi and Namur in October, while Spanish bus maker UNVI announced a partnership with BYD in April, to build open-top electric double-deckers for tourist routes.
The weight of HGVs and the distance they travel makes it less feasible to make the leap to electric. That hasn’t deterred the industry from look at visions of the future, though, when such technology could become commonplace.

Earlier this year, Mercedes-Benz unveiled the world’s first all-electric lorry. Known as the Urban eTruck, it has a gross vehicle weight of 25 tonnes and a claimed range of up to 200 miles depending on load and conditions. It has begun testing in Germany, and the manufacturer plans to expand the trial further afield.

In July, Fuso began production of the eCanter electric light delivery truck at its Tramagal plant in Portugal, while a separate production line opened at its facility in Japan to serve the Asian market a month earlier. It has a range of 100km and a load capacity of two to three tonnes, depending on the body.
Finally, on home turf, the UK’s first electric-only truck manufacturing facility opened at Banbury Cross, Oxfordshire this summer. Then known as Charge Auto, and since renamed Arrival, the firm plans to develop vehicles up to 26 tonnes, and in August, it announced that Royal Mail would begin trialling nine of its vehicles, ranging from 3.5 to 7.5 tonnes.