As part of North America’s first North American Commercial Vehicle Show in Atlanta, Mercedes-Benz Vans is unveiling the first details of the new Sprinter. The design sketch indicates that the most important market launch in the van sector in 2018 will also set new standards in terms of appearance.

The Sprinter has been the Mercedes-Benz flagship van since it was launched in 1995. Two decades in and the new Sprinter is aiming to maintain this position. 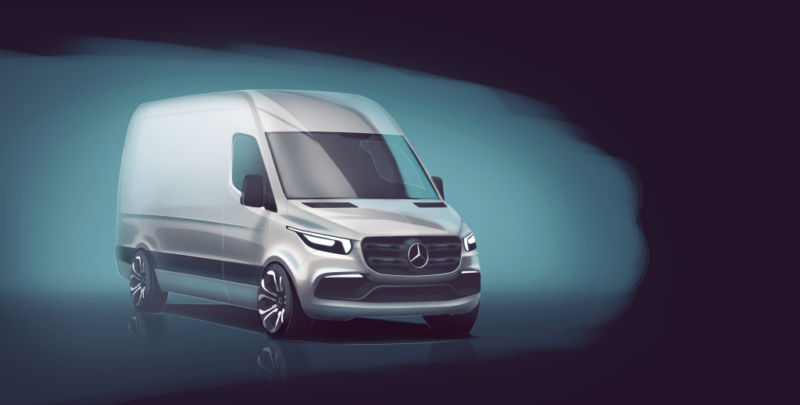 With its new look, the Sprinter once again shifts the boundaries of its segment. The vehicle presents itself consistently in the acclaimed design language of Mercedes-Benz and embodies the opposites of this philosophy: emotion and intelligence. The front of the Sprinter presents itself with horizontal and clearly drawn headlights in a distinctive and athletic manner.

The outstanding new features include the comprehensive introduction of driving assistance systems and connectivity services in combination with new telematics, which will bring a leap forward in efficiency for vehicle and fleet management. Moreover, the new Sprinter can be even more precisely adapted to individual transport and sector requirements thanks to a considerably extended range of variants. With this combination, the new Sprinter is a unique proposition as an overall system solution in the van market.

The market launch will commence in Europe in the first half of 2018, with the other markets to follow. Further details of the vehicle will be announced in the coming months.

For Mercedes-Benz Vans, the introduction of the new Sprinter is more than the presentation of a new model. The Sprinter fully reflects the future initiative adVANce, which was presented in autumn 2016. It aims at megatrends such as digitalization and urbanisation. The accompanying realignment of the company is driving forward the transformation from purely a vehicle manufacturer to a provider of complex, comprehensive mobility solutions. The first new model to represent this further development is the new Sprinter.

The van that founded a whole segment has been the flagship model of Mercedes-Benz Vans since the launch of the first Sprinter in 1995. With a total of more than 3.3 million units delivered to over 130 countries, the Sprinter is one of the most successful commercial vehicles ever, and the best-seller in the product portfolio of Mercedes-Benz Vans. With a growth rate of around 10 per cent from January to March 2017 compared to the same period last year, the Sprinter achieved the most successful first quarter performance in its more than 20-year history. Likewise, in the first half of 2017 the Sprinter was able to break a new record: In total, sales increased to about 96,200 units (previous year 95,100).

The Daimler presentation at the NACV show not only gives a pretaste of the third Sprinter generation, but is also dedicated to further technological advances in the light and heavy commercial vehicle sectors. With its brands Mercedes-Benz, Freightliner, FUSO and Western Star, Daimler has a market share of over 40 per cent and is the undisputed No. 1 in the US commercial vehicle market.