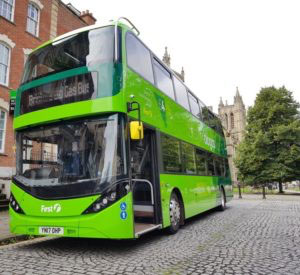 Bus operators and local authorities have been awarded a total of £11 million in funding from the Department for Transport (DfT) towards a new wave of low emission buses.

The schemes, in in Bristol, York, Brighton, Surrey, Denbighshire and Wiltshire, are to share the funding pot, which will contribute to 153 cleaner buses as part of the government’s Low Emission Bus Scheme.

These will join existing projects funded through the initiative in Birmingham, Nottingham, Sheffield and London, which were announced in July 2016.

The biggest grant under the scheme goes to South Gloucestershire Council, which was awarded £4.8 million for 110 gas buses for services around Bristol. First West of England has also begun a trial of a double-decker bio-methane bus in the city as of August 2017.

The other approved projects include £3.3 million for City of York council to use 24 electric buses on park-and-ride services in the city, on the back of a trial which began last month.

British Transport Minister, Paul Maynard, said, “Low emission buses are an important part of our plans to improve air quality across the country. New greener buses will be more comfortable for passengers, they are cost efficient and are good for the environment.”

“I am pleased to announce this latest group of successful bidders, which should make a real difference to air quality in towns and cities across the country.”

The British Government is planning to announce a second round of the ‘Low Emission Bus Scheme’ later this year. It’s fair to ask what is the Irish Government doing in this regard?