As the next phase of the Innovate UK GATEway project gets underway, the project leader, TRL (Transport Research Laboratory) has announced new research that says that more than four out of five people are open to the idea of autonomous vehicles (AVs) on the UK’s roads. 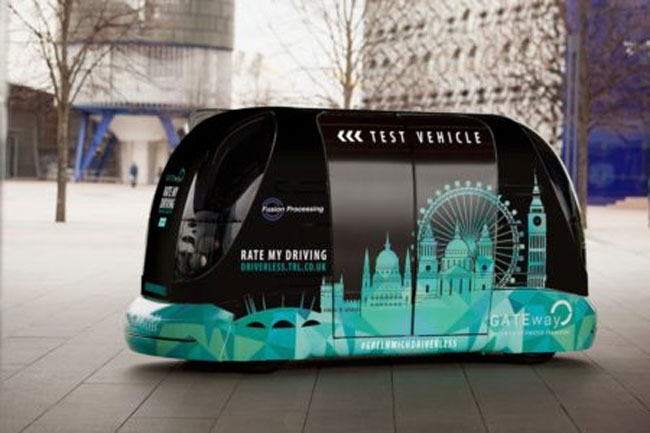 The ‘Attitudes to AVs’ report shows that 81% of people feel that AVs would help deliver a wide range of environmental, social and economic benefits.

In addition, the level of trust in AVs among the people surveyed was also shown to be fairly high, with 55% of respondents agreeing that they trust an AV and 23% saying they ‘somewhat’ agreed they would trust an AV to deliver them to their destination safely.

The move comes as the next phase of the GATEway project, which investigates public acceptance of automated vehicles within the urban mobility landscape, gets underway in Greenwich.

Driverless pods based on the same body as the Heathrow ‘Pods’, which operate on rails in and out of the airport’s Terminal 5, will be trialled in the London borough. The pods are being manufactured by sports car maker Westfield, and will have an autonomy system developed by Fusion Processing, a Bristol-based technology firm.

Simon Tong from TRL is the Technical Lead on the project. He said, “GATEway has always been focused on exploring public perception and understanding of driverless vehicles. With Fusion joining the team, GATEway is in a unique position to let the public interact with three very different autonomous control systems during our urban trials. Each of our autonomy providers – Fusion Processing, Oxbotica and Gobotix – are great British success stories and, together with Westfield, they represent the diversity of driverless expertise in the UK.”

Commenting on the TRL survey, Chief Scientist and Research Director, Alan Stevens, said, “While this survey looks at a relatively small and self-selecting sample of people, it is pleasing to see that so many of them were open to using an autonomous vehicle.”

“Of course, there were also concerns expressed around certain parameters of an AV’s operation, namely the security of the software and what data the vehicle would store. However, these are issues that we are already beginning to address, with work taking place on various projects and trials.”

The latest trial is one of a number of automated vehicle tests within the GATEway project. Other trials in the project include last-mile automated deliveries (tested in June 2017) and autonomous valet parking (due to be tested later in 2017).

GATEway is jointly funded by government and industry. The government’s £100m Intelligent Mobility fund is administered by the Centre for Connected and Autonomous Vehicles (CCAV) and delivered by the UK’s innovation agency, Innovate UK.