A French company that has led a number of autonomous bus trials has confirmed that it will be putting its vehicle into production in the US. 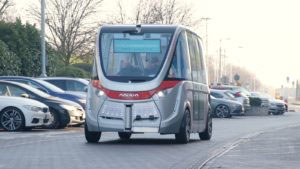 NAVYA’s driverless shuttle has already been deployed in 45 cities, including London, where it completed a three-day trial at Heathrow Airport, and Las Vegas, USA, where it operated up and down the famous strip. To date, more than 170,000 passengers haven taken rides in the shuttles.

In a statement, NAVYA said that the new plant, a 20,000-square foot facility, will create 50 new jobs and help it respond to perceived demand in the North American market. The plant will build the company’s ARMA shuttles, which are driverless, electric and can carry up to 15 people at a top speed of 28 miles per hour. The company claims the batteries can last between five and 13 hours. 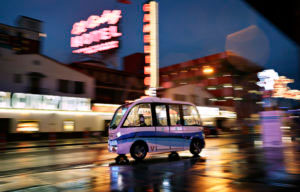 One of the key reasons behind choosing Michigan to house the company’s factory is the state’s growing importance as a hub for autonomous vehicle development. The University of Michigan has established ‘MCity’ in Ann Arbor, a 32-acre test site that offers automakers and technology companies built-to-scale, simulated streetscapes. It has attracted researchers, manufacturing, and investment from all over the globe.

As part of NAVYA’s arrival in town, ARMA shuttles will begin regular service on campus at the University of Michigan and give visitors tours of Mcity.