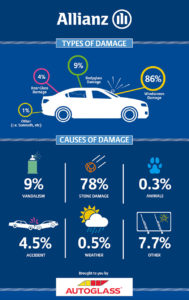 The main cause of windscreen damage according to the Allianz stats were stones on the road which damaged 3,768 vehicles in total. In contrast, the primary reason for damage to both body glass and rear glass was vandalism – 307 body glass claims and 85 rear glass claims were reported last year.