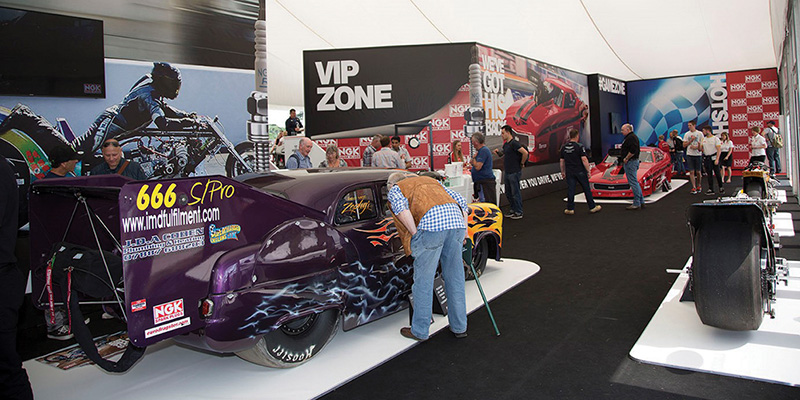 The leading supplier of original-equipment (OE) spark plugs, glow plugs and NTK Lambda and other engine management sensors, exhibited a mouth-watering array of dragster cars and bikes and played host to a number of celebrity guests at the four-day UK automotive extravaganza.

Motorsport legends who visited NGK included 92-year-old Stormin’ Norman, who took the opportunity to sit on his Conquest bikes, ‘Mad’ Mike Whiddett, the New Zealand drifting racer, Andy Robinson and NGK-sponsored four-time and current World Speedway champion Greg Hancock, who attended with his son Wilbur and signed selfies with fans on the second day of the show.

Northamptonshire racer Maria Costello, MBE, who rides the NGK-sponsored Kawasaki ER6 Supertwin, also made an appearance. The first lady of racing recently teamed up with Kirsty Hauxwell to make their debut in the British Sidecar Championship and was due to take on the famous Goodwood hillclimb.

Mark Hallam, NGK Spark Plugs (UK) Ltd Marketing Manager, said “It was a great show. We were visited by thousands of motorsport enthusiasts who took a keen interest in our impressive collection of drag racing machines and also played host to a number of celebrity competitors from the motorsport world.

“NGK has a long-standing connection with motorsport so believes it is important to have a major presence at the Festival of Speed alongside many of the vehicle manufacturers and race teams we supply with our OE components and it was fantastic to see so many people visit us, many of whose cars and motorcycles are fitted with our components.”

Visitors also took part in a Spark Plug Challenge and tackled the Goodwood hillclimb on a racing simulator. There was also a Speedway bike for visitors to test their reaction times on and a competition for youngsters to win prizes by finding images of NGK’s ‘Mr Sparky’ character which were scattered around the stand.

In addition, NGK staff were on hand to give away merchandising in exchange for donations for The National Autistic Society, raising more than £4000 for the charity.

For more information on NGK Spark Plugs (UK) Ltd and its products and services, please visit the website www.ngkntk.co.uk Also you can check out its new blogzine at ngktorque.com