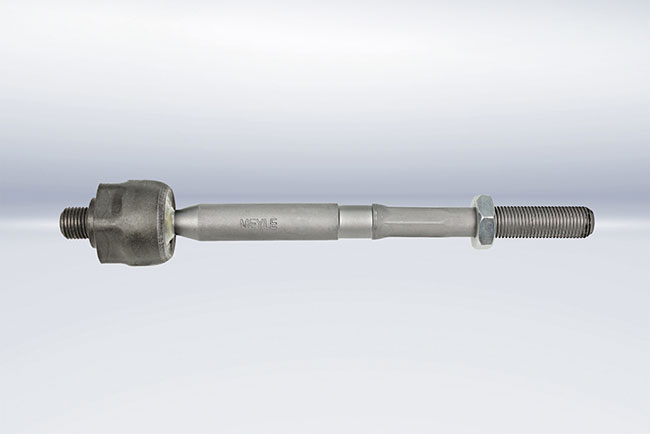 High tensile and compression forces acting on the steering system, experienced for example when hitting a pothole, crossing kerb stones or steering while car is stationary, are a frequent cause of early joint wear and excessive axial joint play. While conducting on-going evaluations of vehicle inspection reports, the German Technical Inspection Agency (TÜV) has revealed that the defect rate is particularly alarming with vehicles that are between three to five years old. The Sprinter and Transporter models stand out as a high-risk group because of the extraordinary strain levels the joints have to put up with, which result from the usually heavy payloads. Axial joints ensure that steering motion is precisely transferred to the wheels. If the axial joint is worn, the impact on the vehicle systems can be dramatic, with the consequences ranging from perceptible steering play, uneven tyre wear and difficulties passing routine vehicle inspections to an increased risk of being involved in a road accident.

“When developing Meyle‑HD axial joints, we scrutinised OE joint designs to pinpoint the root causes for early product failure and then we set about engineering a solution targeted at remedying these weak points”, saysSven Nielsen, Head of Strategic Product Development at Meyle. “Take for example the ball head: Meyle‑HD joints feature a significantly larger ball head than their OE equivalents. This allows for the forces acting on the joint to be distributed across a much larger surface area, which in turn, reduces surface pressure while increasing part life. Depending on the application, the ball head diameter of the Meyle‑HD axial joint can be up to 5mm larger than its OE counterpart.” Subjected to salt spray tests, the Meyle part’s special zinc-nickel coating was proven to offer extraordinary corrosion resistance. Another feature adding repair shop value is the wrench attachment, which allows for simple and quick assembly of the Meyle‑HD axial joint without requiring any costly special tools.

All Meyle parts are designed with the needs of the spare parts market in mind. Meyle applies a multi-stage re-engineering process to make Meyle‑HD parts outshine their OE equivalents. The fundamental step of this process is a detailed analysis of the forces that cause the original part to fail prematurely. Computational models are used for in-process simulation and monitoring of the power flow dynamics. Targeted technical refinements eliminate any weak points, component design is reinforced and higher-grade materials are chosen. All Meyle‑HD products come with a four-year unlimited-mileage guarantee. Since it was launched, the Meyle‑HD product range has grown to feature some 1,000 products catering for passenger car, van and truck models.

Workshop advice:It is recommended that an axle alignment procedure be performed after each axial joint replacement.