Specialist refrigerated transport and logistics company, McCulla Ireland Ltd, has won ‘Temperature Controlled Operator of the Year’ at the Motor Transport Awards. The prestigious event, which took place earlier this month at the Grosvenor House Hotel in London. The Company now operates a fleet of around 100 trucks and 150 trailers. 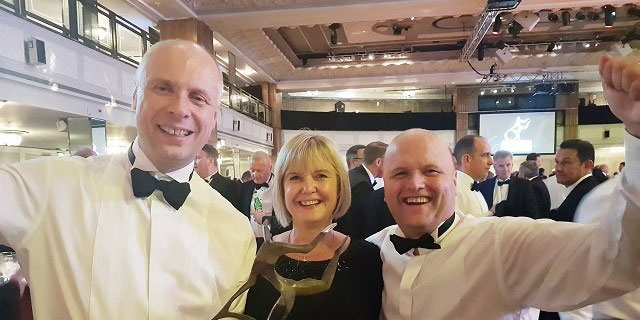 Often dubbed ‘The Oscars of the Transport Industry’, Northern Irish businesses have rarely been represented at this awards event in its 32-year history. Award winners are typically large UK corporate operators, so it is significant that a family-run business from Northern Ireland has been recognised. Indeed, when congratulating the McCulla team on their award, Christopher Walton, Managing Editor for Road Transport Media, the media group responsible for Motor Transport magazine, said that McCulla Ireland had “beaten off stiff competition”.

Being established in 1969 by David McCulla, the Company is fast-approaching its 50thanniversary and is now under the ownership and direction of the second generation of the McCulla family. Brother and sister, Ashley McCulla and Carol Thompson (the youngest two children of the Company Founder), jointly took control of the business in 1992 and have developed it from a company turning over £700,000 to one turning over £21.7m.

At the post-awards interview, Mr McCulla, Managing Director of McCulla Ireland gave credit to the 200-strong McCulla team. He said, “The key thing is that it’s our team that made this happen. As the Directors, we show the way that we’re trying to go and try to set the example, but it’s the staff that do the job; everybody from our drivers to our loading bay staff to the administration staff and the traffic planners. Everybody in the team is why we are here”.

Mrs Thompson, Finance Director, added, “We are so proud that, as a family business, we were still deemed worthy of being up there [on stage]”.

According to Motor Transport, McCulla Ireland was praised for its “innovative, comprehensive and flexible” approach to the frozen and chilled sector throughout the UK and Ireland and the rest of continental Europe.

Under the current Directorship, the business has been differentiated from standard refrigerated haulage by developing the Company into a full-service logistics provider of bespoke solutions for customers of all sizes, including delivery by the box, pallet, or full load. McCulla Ireland is unique in the breadth of services provided to end-users, from major International manufacturers to small corner shops. It has also diversified into additional niche sectors, including pharmaceuticals and tech goods logistics.

Continual and significant investment by the company over the last 25 years has centred on facilities and equipment at sites in Lisburn and Dublin, technology integration, customer service initiatives and staff development.

Most recently, McCulla Ireland has installed an anaerobic digester plant at its Lisburn site at the cost of Stg. £3 million, making it the only company in the UK and Ireland to have a totally carbon-neutral cold store.

The Motor Transport accolade follows a string of other local awards that McCulla has successfully been recognised in, including ‘Mid-Size Family Business of the Year’ at the first ever NI Family Business Awards event.