Goodyear UK began a new three-year sponsorship of the British Truck Racing Championship (BTRC), at the latest round of racing that took place during the inaugural Convoy in the Park at Donington Park last weekend. 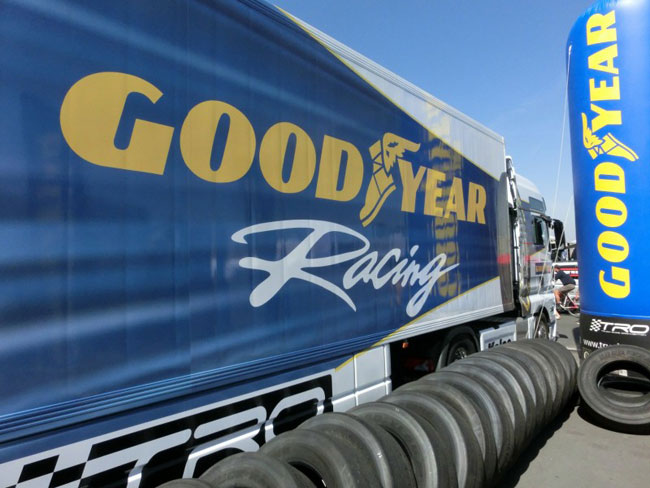 The fifth round of the championship was be one of the major attractions at the event, and was again a great family-friendly event celebrating trucks, drivers and life on the road.

Visitors to the BTRC were able to watch 5.5 tonne trucks racing at speeds up to 100 mph racing on Goodyear truck racing tyres.

These specially developed tyres are built using standard latest generation Goodyear 315/70R22.5 truck tyre casings. They have a special compound and tread design to ensure that the 1,500 horsepower trucks have high level of grip in both wet and dry conditions.

Marc Preedy, Director Commercial Tyres at Goodyear UK, told us: “We’re very excited to be the title sponsor of BTRC, which is without doubt one of the most spectacular sights in British motorsport

Goodyear has spent years investing and developing its truck racing tyres, which are capable of taking the high impact from 1,500 horsepower, 5.5 tonne trucks racing at up to 100 mph. The tyres used currently are Goodyear Truck Racing using standard latest generation casings, which prove the incredible resilience of Goodyear’s standard truck tyre carcasses.