Frank Keane Volkswagen has been awarded Volkswagen Commercial Vehicles Dealer of the Year 2016 at the recent Volkswagen Gold Pin Awards. 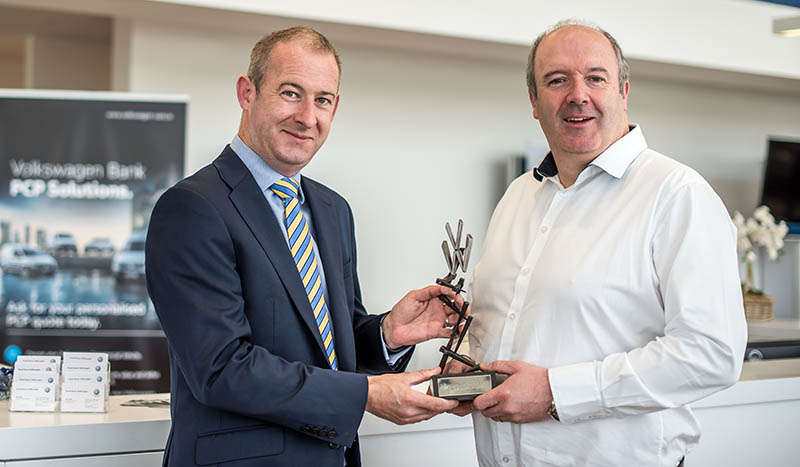 In 2016, Frank Keane Volkswagen acquired MSL Motor Group Volkswagen in Deansgrange, Ballsbridge, and Pottery Road. They also merged with the MSL Volkswagen Showroom in Deansgrange and opened up an all new state of the art service centre. With this extensive expansion, the Commercial Vehicles department, successfully managed by Ger Colwell has developed into one of Ireland’s leading Van Centres.

Congratulating the team at Frank Keane Volkswagen, Volkswagen Commercial Vehicles Director Alan Bateson said, “2016 has seen continued growth in Ireland for Volkswagen Commercial Vehicles with strong results delivered through the recovering Irish economy. Our vans are proving more popular than ever, not just because of their unmatched quality and comfort, but also because of our leading residuals that are guaranteed, the only commercial vehicle brand in Ireland to do this. Also, there is the Customer-first service support provided from our dedicated van centre network in Ireland. 2016 was also a great year for Frank Keane Volkswagen and I would like to thank everyone involved for their hard work and determination. The great news is that we have carried this strong performance and phenomenal momentum into 2017 and with the recent launch of the all new Crafter, International Van of the Year 2017 we are focused on continued growth in the Irish market.”