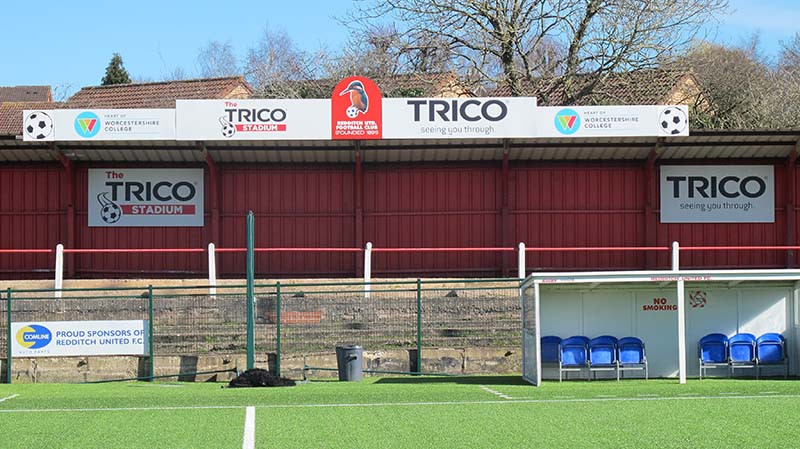 Representatives of Trico, Club Chairman, Chris Swan, and other distinguished guests – including Parliamentary Under-Secretary for the Department of Culture, Media and Sport, Tracey Crouch MP, and MP for Redditch, Karen Lumley – helped the Evo-Stik League Southern side cut the ribbon on a beautiful Spring afternoon.

Once the formalities were completed, various local youth teams showed off their skills on the fresh surface, impressing onlookers, one of whom was Redditch United Manager and former Gillingham, Rotherham and Walsall forward, Darren Byfield.

The £900,000 facilities are projected to create 17 new teams and will allow Redditch United to bring its 38 affiliated teams ‘home’ to one venue, as well as Birmingham City Ladies FC, creating its own grassroots hub.

Trico, an original equipment and aftermarket supplier of wiper blade and systems, has proved a major supporter of Redditch United since it agreed to sign-up to the Club’s dream of climbing the football ladder.

While results on the pitch during the 2016-2017 season haven’t gone according to plan, matters off it have gone from strength to strength, culminating in the shiny livery that is illustrated as fans walk through the entrance gate and dotted around the stadium.

Marketing, Brand and Product Manager, Sam Robinson, said the company was “a proud partner” of Redditch United Football Club and was delighted with how the opening ceremony unfolded.

He said: “We (Trico) are delighted to join all associated members of Redditch United to unveil The Trico Stadium. Trico is dedicated to supporting the Club’s drive and commitment to grassroots football and helping disadvantaged players enjoy their football.

“Clearly, illustrated by the ribbon-cutting ceremony, the Club is held in high esteem and the investment is clear. On and off the field, we can see ambition and genuine progress, which suits Trico.”

Redditch United Chairman, Chris Swan, thanked Trico for its continued support and significant commitment, and he is excited to witness some memorable moments inside The Trico Stadium moving forward.

He said: “This is a vitally important time for Redditch United Football Club. Trico has demonstrated its long-term assurance in joining our climb up the football pyramid, but also building a legacy that will see The Trico Stadium become a grassroots hub for upcoming and disadvantaged players from the local area.

“The immaculate 3G pitch and refurbished changing rooms is proof to our deserving fan-base that Redditch United Football Club is definitely going in the right direction.”

Trico and Redditch United have some intriguing ideas up their sleeves, which will improve the matchday experience, but, in the meantime, Trico is looking forward to welcoming fans through the gates of The Trico Stadium.