Dominating the Midland Moto Rally in Longford, the second round of the Triton Showers National Rally Championship, Monaghan’s Sam Moffett (Ford Fiesta WRC) took a convincing win to extend his lead in the national series. 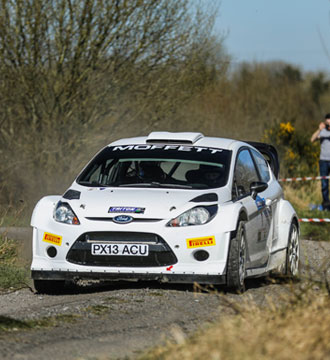 Co-driven by Cork’s Karl Atkinson they finished a minute and 9.9 seconds ahead of the Ford Fiesta WRC of reigning champions Clonmel’s Roy White and his Cork co-driver James O’Brien. Donegal’s, Manus Kelly/Gareth Doherty (Subaru WRC) were 21.1 seconds further behind in third.

Stage by stage Moffett increased his lead as Declan Boyle led the pursuit, however, a number of time-consuming spins cost him vital time, his rally ended when he hit a chicane on Stage 7 and his Ford Fiesta WRC ended up in a field.