Kris Meeke and Paul Nagle kept up their impressive form and (just about) held their nerve on the final day of Rally Mexico. Despite running off the road a few corners before the end of the Power Stage, the Citroën Total Abu Dhabi WRT crew secured the C3 WRC’s maiden rally win! 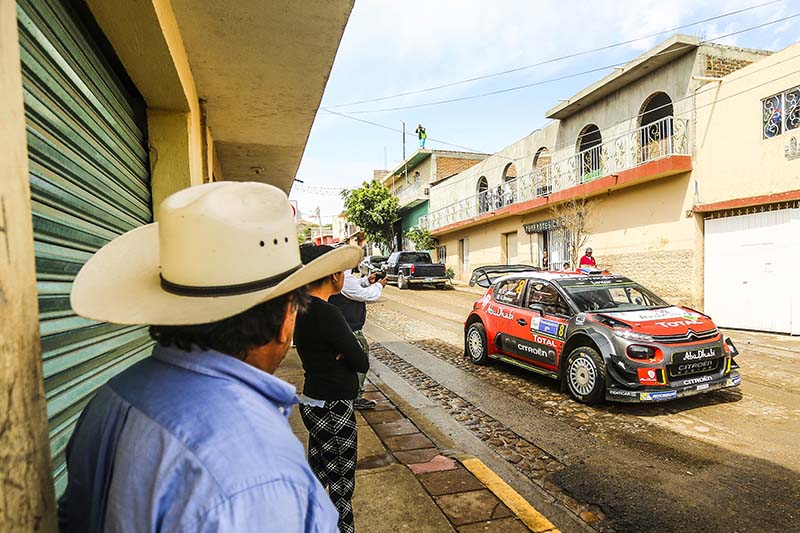 – On the penultimate speed test, Kris Meeke claimed his fifth stage win of the weekend. He extended his lead over Sébastien Ogier by another 6.3s, whilst Stéphane Lefebvre set an excellent third fastest time.

– The team looked on nervously as the crews contested the Power Stage, broadcast live on television. And there was certainly no shortage of drama! With the finishing line almost in sight, the Northern Irishman’s Citroën C3 WRC ran wide on a long right-hand corner. The car ran through the hedge at the side of the road and into… a spectator car park!

– Kris managed to keep his cool, get around the parked cars and back onto the road in a few seconds. He crossed the finishing line to secure victory by 13.8 seconds!

– After something of an emotional roller-coaster ride during the final stage, there were scenes of joy and celebration in the team as Kris and Paul were welcomed as champions on their return to the León service park.

– This is Kris Meeke and Paul Nagle’s fourth win in the WRC, following Argentina in 2015, and Portugal and Finland in 2016. It is also Citroën’s 97th win in the World Rally Championship.