Renault Ireland has given away a brand new 171 Renault Captur to the lucky winner of a recent Late Late show competition.

Kathy Shine, the Late Late Show viewer competition winner revealed how she prayed to her deceased mother in a bid to secure the new car for her brother Mike, who is stricken with MS. 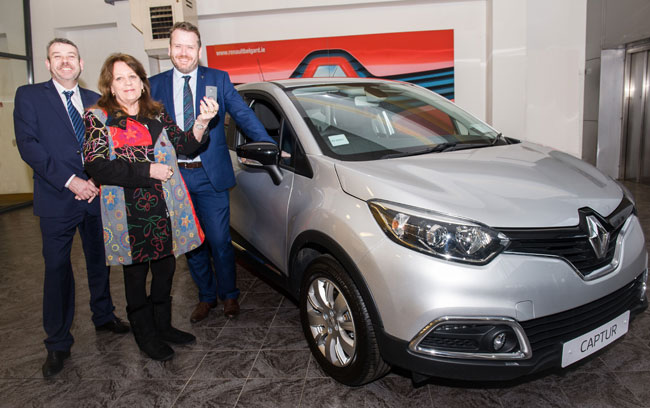 Kathy from Walkinstown in Dublin won a Renault Captur worth €20,000 from 200,000 entries and she says she turned to the power of prayer in a bid to win the car so she could sell it so that her brother, Mike, could update his disability van.

Speaking to Ryan Tubridy after the win on The Late Late, an emotional Kathy, accompanied by Mike and his wife, Joan, said: “I was lying in bed last Friday night watching the show. I’d already sent in the coupon for the competition”.

“You walked over to the drum with all the entries and I sat upright in bed and I said, `Mum’, my mother died 20 years ago but I still have her around me, and I said, `Mum, I am begging you please let him pick out my card so I can give the car to Michael to update his disability van.

“When you pulled out the card and said `Kathy’ I thought, `Oh no! Why has someone called Kathy won it?’ and then you read out `Kathy Shine, Green Park, Walkinstown . . . ‘”

Mike was diagnosed with MS when he was 29 and while medication had helped the disease go into remission for 20 years, it re-emerged with a vengeance. He is now very disabled and wheelchair-bound, has use of his right hand and can speak, but does so slowly.

Joan, who Kathy described as “an angel”, gave up her job to look after Mike full time at their home in Galway.

Asked what he thought about his sister winning the car, Mike said, “I thought it was a fiddle that she managed somehow.” Looking heavenwards, he joked, “And it is. Mum, you should be ashamed of yourself. Kathy is lucky. If you’re with her, send her in to buy the lottery tickets.”

Kathy, who doesn’t drive, said that she hoped Renault would give Mike the money to update his van directly. However, in an extra happy ending to the story, Renault very generously gave Mike an extra €5,000 to help to kit out his current van to make it suitable for his needs.

Karla Clifford, Renault Ireland Brand Communications Manager: “We were all delighted to see such a selfless and generous person winning the Renault Captur Giveaway. Renault Ireland wish Mike and Kathy the best of luck in the future”

Present at the car handover was  Conor Dixon, Renault Ireland & Kevin Troy of Renault Belgard  who were delighted to hand Kathy the keys to a brand new  Renault Captur.