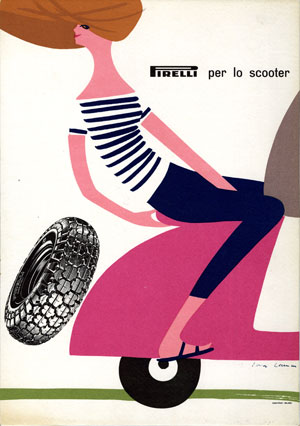 The exhibition traces over 140 years of Pirelli: factory workers, technology, new product research, relationships with the arts and innovative communications, motorsports and the famous calendar. It is also the opportunity to present first pictures of a new project taken inside the Pirelli industrial Hub in Settimo Torinese by Peter Lindbergh, author of the 2017 Pirelli Calendar, to the general public.

The exhibition, curated by Fondazione Pirelli which runs the Historical Archives from where the material was picked, is promoted and organized by Comune di Settimo Torinese with the contribution of Pirelli and Fondazione ECM (Esperienze di Cultura Metropolitana) and is sponsored by Regione Piemonte and Città Metropolitana di Torino. Attending the presentation were the President of Regione Piemonte, Sergio Chiamparino, Mayor of Settimo Torinese, Fabrizio Puppo, Executive Vice President and CEO of Pirelli, Marco Tronchetti Provera, the President of Fondazione ECM, Aldo Corgiat, and Managing Director of Fondazione Pirelli Antonio Calabrò.
“We are privileged to offer the opportunity of a unique exhibition to visitors to the Archimede Library”, said the Mayor of Settimo Torinese, Fabrizio Puppo. “The photographs and illustrations retrace the over 140 years of history of Pirelli, which is in part the history of our city and of many workers and citizens of Settimo Torinese and the surrounding towns who have worked there and contributed to its growth. Employment, culture and innovation and three key concepts that tie the history of Pirelli to that of our city and that is told in the most exciting way in the ‘Pirelli in 100 pictures’ exhibition”.

“Innovation and product quality, attention to people and communication with the district where our plants are situated, in Italy and in the world, have always been among the strongest values of Pirelli”, declared Executive Vice President and CEO of Pirelli, Marco Tronchetti Provera. “The exhibition in Settimo Torinese, the site of our most innovative industrial hub, is proof of this. The commitment of the Settimo and Regione Piemonte local authorities, which whom we have interacted with mutual benefit for many years, drives us to continue to operate by combining local and international perspectives”.

“We are proud to have this opportunity to host the splendid ‘Pirelli in 100 Pictures’ exhibition”, added the president of Fondazione ECM, Aldo Corgiat. “This activity is part of a comprehensive cultural program involving Settimo local authorities, Fondazione ECM and Pirelli, which included the shows of Marco Paolini and Moni Ovadia to celebrate the 50th anniversary of Settimo earning city status, the WORKERS exhibition, concerts in the factory for the MITO festival, the Innovation and Science Festival of which Pirelli is Main Sponsor and the library opened in the plant with the collaboration of Archimede”.

The “Pirelli in 100 Pictures. Beauty, Innovation, Manufacturing” exhibition is further confirmation of the importance of culture as a tool for driving development, social cohesion and integration, in addition to reasserting the bond between culture and employment in Settimo Torinese. For Pirelli, in particular, the exhibition follows the activities organized and sponsored in Settimo by the company and by Fondazione Pirelli, which was established in 2009 to promote and disseminate corporate culture, history and documentation. Examples of these activities include the three concerts organized at the Hub in 2010, 2011 and 2014 for the MITO Festival, that Pirelli has been sponsoring since 2007, and the support offered by Pirelli to the Innovation and Science Festival.

The exhibition develops through six sections. “Una P lunga oltre 140 anni” (a “P” over 140 years long) traces the history of Pirelli through the pictures of its factories and its products: from the first plant on the outskirts of Milan to the first international exhibitions, illustrated catalogues and “Pirelli” magazine covers. “La fabbrica degli artisti” (the factory of artists)  presents some of the many opportunities that painters and photographers have taken to express their art and tell about the world of factories and manufacturing. “Si va che è un incanto” (it runs like a charm) documents the daily challenges that Pirelli has tackled in the racing world since 1907.  “Una Musa tra le ruote” (a muse in the wheels) focuses on the relationships between Pirelli and the arts since the beginning of its history from the earliest artist advertising campaigns to illustrations. Elogio della Bellezza” (celebration of beauty) is a line-up of the female icons that introduces visitors to the last section dedicated to the Pirelli Calendar 1964-2017” with pictures by the greatest names in photography.
The most recent was German master Peter Lindbergh, who took a number of enthralling and powerful photographs in the factory in Settimo in preparation for the 2017 Pirelli Calendar. Those pictures have become a project in their own right and are presented in preview to the general public.

Pirelli has been present in Settimo Torinese since the 1950s. Today’s industrial site was added to the original factory purchased from Ceat in 1984 and was the object of major investments over the following two years. The idea of the new Pirelli industrial Hub of Settimo Torinese came in 2007. The project consisted in integrated the two Pirelli plants already present in the area in a single area: works started in June 2009 and production was kicked off in May of the following year.

The Hub is also the result of profitable collaboration with local organizations and the Turin Polytechnic for research and innovation matters. It is the most technologically advanced and efficient Pirelli plant in the world in terms of product innovation, manufacturing processes and working environment quality. World-renowned architect Renzo Piano was called to design the “Spina”, as the central body is named, which houses the R&D labs and many services for employees. As a result, this part of the plant has naturally became the keystone for supporting production and fostering fraternization among workers.

Renzo Piano also designed the landscape projects that immerse the factory in 500 cherry trees, in addition to the on-site road network and the lighting. With an initial investment of 150 million Euro, which was increased to 300 million following the total refocusing of the plant on Premium and Prestige segment car tyres, some of the most advanced Pirelli technologies are implemented in the plant, like the Next Mirs robotized system, the new compound production system (PTSM) and the most recent PNCS-Pirelli Noise Cancelling System.

Production in the Hub, focused on low-environmental impact High-Performance and Ultra High-Performance tyres, totals over 4 million parts. Part of the investments was destined to the training over 1,200 workers focusing on skills aimed at achieving technological excellence, adding up to over 221 thousand hours in total, that is equal to 25 days per person over the 2009-2015 period.

President of the Republic Giorgio Napolitano visited the Settimo Hub on 19 March 2011 during the celebrations for the 150th anniversary of Italian unity organized by the local authorities of the city of Turin.