Effective since November 2016, ECE R90, the regulation specifying design, construction and performance requirements for friction material in brake pads and shoes, has been extended to brake discs and drums as well. 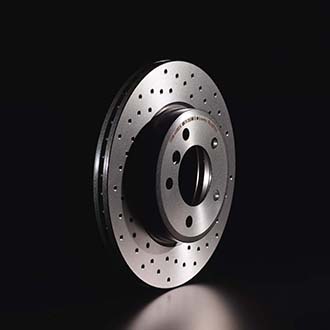 The ECE R90 regulation, which originally applied to brake pads and shoes, has recently been modified, and the new version, R90-02, starting from November 2016, also mandates testing of discs and drum brakes which are sold as spare parts for newly registered vehicles.

As a producer of brake discs, Brembo was called to contribute significantly to the creation of the new regulation, and actively participated in the working group of the Economic Committee for Europe and the United Nations.

The regulation was designed to guarantee that discs and drums used as spare parts will provide equivalent performance in terms of functionality, safety and efficiency when compared to the original product they are meant to replace.

All tested products can be recognised thanks to the certification code provided by the certifying agency which will be branded on the product (alongside other information to allow traceability) as well as printed on the package label.

Given the extraordinary experience of Brembo in the design and production of brake systems both as Original Equipment and as Aftermarket, it has always offered a product range with technical features equivalent or superior to the original, amply exceeding the requirements set forth by the new regulation.

In fact, over the past 15 years Brembo has guaranteed the elevated standard of its brake discs by having them ABE certified, by the German Federal Motor Transport Authority. In doing so, Brembo anticipated what would rightly become a market necessity, further safeguarding the end user.

Having always been keenly aware of safety issues related to brake system components and having promoted numerous awareness campaigns on the topic, Brembo gladly welcomes the new regulation, which fills a legislative gap and provides a single standard recognised by all countries. Brembo has, therefore, decided to immediately certify not only the components used in newly registered vehicles, but its entire range of discs and drums, which amounts to over 2,200 articles, covering 97% of the fleet in Europe.

Thanks to the work done by the R&D department Brembo has already tested and certified 95% of the products available in the catalogue, for both the range of discs equivalent to the original, and the more performing and sporting ones, such as Brembo Max slotted discs and the new range of Brembo Xtra drilled discs.

For Brembo this is an important step forward for the entire automotive sector and for professionals operating in the sector, as growth cannot be separated from greater concern for the safety of the end user.