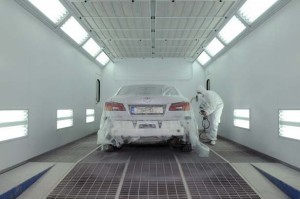 Many of these bodyshops have had a long standing working partnership with this particular insurer, and one told us that it had provided an exemplary service to the insurer and their customers for up to 20 years.

As far as we are aware, this is an unprecedented move by a major insurance company in Ireland. It is even more surprising because this particular repairer network has long been held up as part of a gold standard of repair networks, not only in Ireland but further afield.

Another repairer that we spoke to told us that they had been working closely with the insurer to manage and reduce the cost of repair indeed right up to the time the notice to quit was issued.

We have carried out further investigations into this move that has shocked the accident repair industry, and it appears that the insurer in question has appointed one bodyshop group as their sole repairer, and it would would also appear that this repairer will have complete control over all aspects of the accident management for this insurer.

One industry source that we spoke with told us that this move is actually threatening the the whole viability of the Irish accident repair industry.

It should be noted that this insurer is not new to introducing pioneering and innovative concepts to the Irish automotive insurance market having out sourced their entire claims handling process to India a couple of years ago. However, as with many others that went before them from other sectors, this then ground breaking move for the bodyshop industry proved unsuccessful from a customer service perspective, and the entire process was repatriated to Ireland.

Among the many questions that this latest development poses include: will this have a detrimental effect on the customers’ right to choose where they have their car repaired? In many cases, crash repairs are carried out by approved outlets with whom that vehicle owner they may know and trust?

Will this action further reduce competition not only in bodyshops but also perhaps with their suppliers? How can this be good for the future of the industry and for the motorist?

We are inviting comments and submissions from Irish bodyshops, suppliers to bodyshops, the Irish insurance industry and any other interested parties.